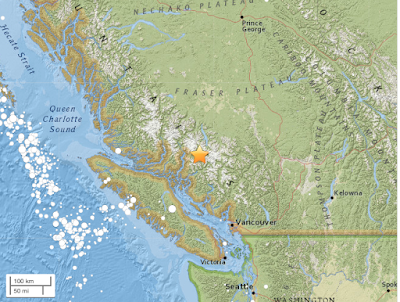 The latest in moderate earth movements along the British Columbia coast was recorded at 6:40 this morning striking an area 114 kilometres North of Powell River.

The 4.0 magnitude temblor had a depth of 17.1 kilometres and was felt across a wide area of Vancouver Island, including Victoria, as well as on the Sunshine Coast are of the mainland.

No reports of damage were reported from the seismic event.

No Tsunami warning was generated by the early morning quake.

It's the latest of moderate events to rattle around the Southern portion of British Columbia, though the first recorded on the mainland for the year, the previous reports have all been located along the off shore fault line parallel to Vancouver Island

You can review some of the background on the seismic activity for the year so far from our archive page here.
Posted by . at 12:08 PM

Email ThisBlogThis!Share to TwitterShare to FacebookShare to Pinterest
Labels: 4.0 quake near Powell River