The Power of Ideas ... on display at CHSS this week 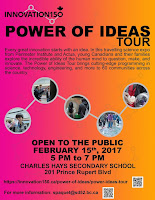 A caravan of ideas has made its way to Prince Rupert, as the Perimeter Institute sets up shop at Charles Hays Secondary today and tomorrow, a stopover that brings some hands On Science to the North Coast.

As we outlined on the blog back in December, Prince Rupert is one of only 60 communities to host the touring exhibit which is part of the celebrations for Canada's 150th Anniversary this year.

The stop in the city is the only appearance the exhibit will make in the Northwest as part of its ambitious Cross Canada tour.

Co-presented with Actua, the set up at Charles Hays will be in place for two days for students of the District to explore, offering glimpse into the worlds of science, technology and engineering.

For the public a two hour Open House is set for today from 5 until 7 PM, making for a good opportunity not only for residents of the North Coast but visitors here for the All Native Tournament to explore the project.

After another day of sessions for students of the District on Thursday, the Power of Ideas will pack up and head for Whitehorse the next destination on their Cross Canada tour.

You can check the video below what is in store for students of Charles Hays, as well as residents of the city and those visiting for the All Native Basketball tournament.

More notes on education in the Northwest can be found on our archive page here.
Posted by . at 8:38 AM

Email ThisBlogThis!Share to TwitterShare to FacebookShare to Pinterest
Labels: Power of Ideas exhibit at CHSS