A Valentine's Day vigil organized by a trio of mothers from the Prince Rupert area received some attention from the British Columbia Legislature on Thursday afternoon, as North Coast NDP MLA Jennifer Rice paid tribute to their efforts during the statements period of the Legislature session.

Ms. Rice outlined some background of the Prince Rupert event which took place in the afternoon on February 14th at the McBride Street Bridge which marks the starting point along Highway 16.

During her short comments for the Legislature the North Coast MLA noted that the North Coast vigil was held in memory of the missing and murdered women along the Highway 16 corridor, a stretch of British Columbia highway that is known as the Highway of Tears.

The Valentines Day vigil in Prince Rupert was organized by three residents of the region who went by the title of Indigenous Mothers, Tuesday's vigil attracted both local residents and visitors that are in Prince Rupert for the All Native Basketball Tournament.

The North Coast vigil and was one of a number of similar events and women's marches that took place across the province on Tuesday.

In a follow up note posted to a Facebook page created for the event, organizers thanked those that attended and outlined what their plans include as they look to build on the spirit of Tuesday's gathering. 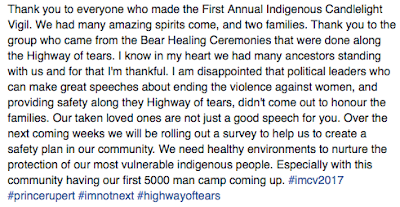 You can watch Ms. Rice's presentation to the Legislature from the video below:


For more items related to the work of the North Coast MLA in Victoria see our Legislative Session Archive page here.

Further background on developments from Victoria and across the North Coast riding can be found as part of our Legislature Archive page here.

To keep up to date on events along the Provincial election trail our Election Archive page is available here.