Another step forward on the path of LNG development for the Northwest took place in Victoria today as Premier Christy Clark outlined the terms of a new agreement with two North Coast First Nation groups that are designed to strengthen the economic future for Lax Kw'alaams and Metlaktatla.

With Mayor John Helin and Chief Councillor Harold Leighton on hand, the Premier spoke to the theme of past events since First contact and how today marked a historic day for all involved.

The Premier hailed the work of the representatives from both First Nations communities, noting that the agreement that has been completed is part of the reconciliation process and that creating a new relationship is a way to heal the scars of the past.

With the Premier describing the agreement as a another major step forward for LNG in the province, today's announcement was centred on the Pacific NorthWest LNG project which the Malaysian energy Petronas has proposed for the North Coast.

It was an agreement that the Premier noted brings both Lax Kw'alaams and Metlakatla in as full partner, hailing their involvement in a new industry that is being developed in the Northwest and one that offers many benefits for both communities as they look to provide for their people.

The Three agreements with Lax Kw'alaams will centre on the following areas:

The Lax Kw'alaams LNG Benefits agreement is the largest of the three and totals 98.5 million dollars, an overview of what it offers can be found below (click to enlarge) 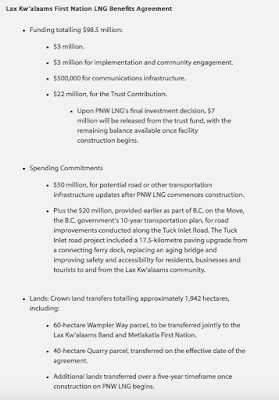 Included in the LNG Benefits Agreement is a trust fund and capital for road improvements and infrastructure. Upon Pacific NorthWest LNG’s final investment decision, a predetermined amount of funds will be released from the trust, with the remaining balance available once facility construction begins.

A total of 1,942 hectares of Crown land will also be transferred to the Lax Kw’alaams Band as part of the benefits detailed in the agreement.

Jobs Training was also an element of today's announcement, with a review of the benefits agreement between Pacific NorthWest LNG and Lax Kw'alaams, which includes the following:

Access to employment; Training and capacity funding
Financing for cultural support
Participation in ongoing environmental monitoring
First Nations business opportunities in the construction and operational phases of the project
Annual payments based on production of the LNG facility.

The full overview of the three agreements and how Lax Kw'alaams plans to make use of the funding can be examined here.

Premier Clark expanded on the theme of how the agreement will help to grow the economy in the two communities and marks a fundamental change in the way that we do business in British Columbia,  ensuring that First Nations are meaningful partners in that growth.

She pointed to training and job opportunities that will come with change and through the hard work and vision of the First Nations leaders in the two communities.

Mayor Helin called the day a historic one, and expanded on the journey that the province and his community had embarked on, building relationships and noting that the government of Lax Kw'alaams is now fully part of what is going on in their territory.

He reviewed some of the process that was involved in the negotiations to the ceremony of the day and also noted that the benefits that had been reached were huge for the community and called attention to the environmental structure that had been created to watch over the project as it progresses.

“After many meetings and negotiation sessions, I feel pleased we are at this stage,”  ... “We have the first of its kind environmental agreement and have a benefits package that will allow us to go a long way to address the needs of our members, should this project proceed.”

That was much the same view that would come from Metlakatla, as Chief Councillor Harold Leighton offered his observations on the day's events.

He called the agreement a very exciting time for the Metlakatla Nation and outlined some background on the long process of negotiation and how the provincial government and his Nation had come to know each other better during the course of their discussions.

He too observed on the environmental overview that the agreement has provided for and hailed it as a leading edge approach that is a first of its kind for the Canada. He also noted that it Providing the Coast Tsimshian a say in how the facilities are going to be built and that they are built safely.

The Three agreements with Metlakatla will centre on the following areas:

The Metlakatla Benefits Agreement is the largest of the three and totals 46 million dollars, an overview of what it offers can be found below (click to enlarge) 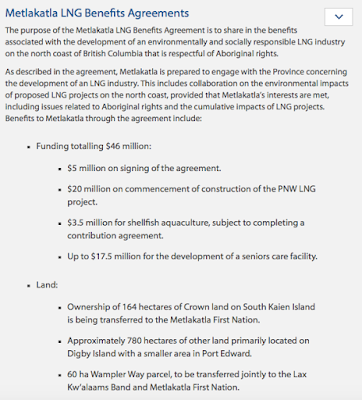 The full overview of all three agreements and how Metlakatla plans to make use of the funding can be examined here.

In a statement released as part of today's 'signing ceremony, Chief Leighton made note of the progress that has been achieved through the discussions.

“Much progress has been made through these agreements to ensure financial benefits and economic development opportunities are realized to the benefit of the members and the region. Supported by these agreements, we look forward to continued collaboration with the Province and industry to ensure high safety and environmental measures are in place for LNG development on the North Coast and that the protection of the air, land and waters of our traditional territory is ensured”

As for immediate benefits for the community, Chief Leighton noted some of the upgrades for Metlakatla's Marine facilities and vessels. He also looked forward to the opportunity to start to train Metlakatla members for future opportunities with the arrival of the LNG industry on the North Coast.

On the revenue sharing side he noted that it would bring significant change to both communities and how one day both may at some point in the future be self sufficient. He also noted that the size and the scope of the agreements is something that his community has not seen before.

Chief Leighton also had words for the neighbours around the North Coast, noting that these aren't just opportunities for Metlakatla  adding that they are opportunities for their partners in Prince Rupert, Port Edward and beyond and how everyone can benefit from the project.

Representing Pacific NorthWest LNG was Wan Badrul Hisham the Chief Project Officer for the energy company, who congratulated the two communities and the province for their vision and productive approach to move towards finalizing the dreams of LNG in the province.

He observed that the company was very encouraged by the developments of the day and noted that it sets the stage for meaningful and respectful engagement from all parties on the project and how it would help to provide for access to jobs, financing for culture and sport, and First Nations business opportunities.

As well he noted that a project as large as the Pacific NorthWest LNG project would offer a chance to bring residents back to their homes of the Northwest.

However, those looking for an announcement as to a final decision for the project will have to wait a bit longer, as no further details related to the timeline for the proposed development were provided at today's signing ceremony.

You can review the full signing ceremony from this Pericscope broadcast

Further background on the Pacific NorthWest LNG project can be found here.

While notes related to developments from the two communities.