During the course of their February 14th School District meeting, the Board outlined the current status of the quest to replace the city's Middle School on Ninth Avenue West.

As part of the media release of their report on the meeting last week, the District notes that the Ministry of Education will be making its final decision on the capital plan in the near future.

As part of that process, Tina Last, the Chair of the School District was directed to write a letter to Education Minster Steve Bernier urging the Ministry to approve the replacement.

The Board's desire for a replacement for the aging building that once housed the city's secondary school was part of a comprehensive review of the School District's facilities one year ago.

As we outlined on the blog at that time, Prince Rupert Middle School  was ranked as in Very Poor Shape, with the facility noted as one that was coming towards the end of its life cycle. 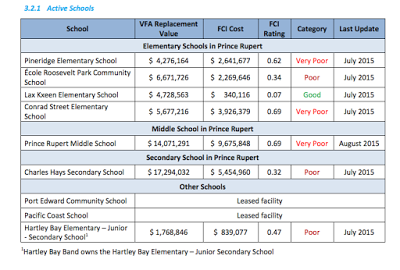 The School District's work on its middle school concerns goes back to 2012, shortly after the merger of Prince Rupert Secondary with Charles Hays on Prince Rupert Boulevard.

At that time the estimated cost of replacement for the building was tagged at 22 million dollars. The statement from the School District from five years ago indicated the urgent need for replacement

"PRMS is an aging building with most systems nearing the end of their useful life".. "We will continue to ask the Ministry to consider this project a priority, so that the expensive repair of these systems can be avoided and our students can learn in a new, environmentally friendly and purpose-designed building."

With the School District preparing to send a letter to the Minister, they might also wish to give both MLA Jennifer Rice and Herb Pond the Liberal candidate in the May election a reminder as to the need for infrastructure in the community and to seek their support in delivering the message.

Having both candidates on board with their quest might help to illuminate the importance of the issue for the Provincial government as they look to reach a decision.

There was no indication from last week's meeting as to what kind of timeline the province may be using to determine when or if the Middle School will be replaced.

More items of interest related to Education on the Northcoast and in the Northwest can be found on our archive page here.