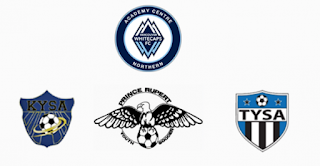 Soccer is about to get a whole new look in the Northwest as the popular Whitecap Academy program expands its reach into the Northwest corner of the province.

The Vancouver Whitecaps announced their program plans for this spring on Friday, outlining how the Academy project will work, with prospects having to go through an evaluation process on a invitation basis.

The first of the evaluations will take place from April 18 to 23 and details will be posted to the website set up by the Vancouver Football Club at whitecapsfc.com/princerupert

A similar site for youngsters in the Terrace/Kitimat region can be accessed here.

Dan Lenarduzzi the Whitecaps FC director of soccer development took note of the opportunity to be found in the Northwest.

“We’re thrilled to expand our programs in Northern BC to include Prince Rupert, Terrace, and Kitimat,”...  “We thank the local soccer associations for their tremendous efforts in partnering together, notably Mike Cavin from the PRYSA, Sean Bujtas from the TYSA, and Alex Ramos-Espinoza from the KYSA. Bringing high level coaching and programs to these communities is part of our long-term vision to support BC Soccer and Canada Soccer in growing the game in our province, and throughout the country.”

The view from Prince Rupert is equally optimistic about the good working relationship that could be developed with this program, with Mike Cavin, President of PRYSA noting how local players will benefit from what the Whitecaps organization will bring to the region.

“PRYSA is very happy to have Vancouver Whitecaps FC opening an academy centre in Prince Rupert and Terrace this spring,” ... “The expertise that the program will bring to our players and coaches will be invaluable. It will allow players from Northwest BC to have similar opportunities as other players from around the province.”

The Prince Rupert Spring Pre-Prospects Sessions will take place from May through July with training to take place at the Charles Hays Secondary field.

Prospects will also go through their paces during those same months, though the training location has yet to be announced.

All of the Northern Academy programs will gather in Prince George in July for what is being called a Spring Summit, where each region will test their skills out against others from the Northern District.

Charlie Angus will be the head Coach for the Northern Academy Centres and will be watching over the Northwest expansion as the first year of operation rolls out.

With the first of the Academy projects set to start in April it's worth a reminder to take note that today is the final day for registration for Prince Rupert Youth Soccer, you can access registration information here.

You can register online or drop into the Civic Centre tonight from 6 to 8:30 PM, where you can also find out more about the local plans for the Whitecaps Academy concept.

Some background on how the program has worked in other communities can be found here.

More items of interest about Youth Soccer in Prince Rupert can be found on our archive page here.
Posted by . at 9:18 AM

Email ThisBlogThis!Share to TwitterShare to FacebookShare to Pinterest
Labels: Whitecaps Academy setting up in Prince Rupert and other NW communities