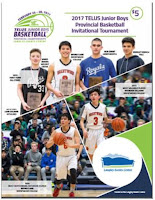 The quest to bring a Provincial Basketball Banner back to the North Coast will take place from February 25 to 28 as the Charles Hays Junior Rainmakers hit the court for the Telus Junior Boys Basketball Championship.

From Saturday onwards, coach Kevin Sawka's squad will be working hard to make the journey from opening round to Championship game on Tuesday night.

The Rainmakers gained their berth in the tournament two weeks ago when they hosted the Northwest Zones at the Charles Hays Gymnasium.

Tipping off against their long time rivals from Caledonia, the Junior Boy's wrapped up their undefeated run through 2016-17 with a Saturday afternoon victory over the Kermodes to claim the Northwest banner.

Since then their focus has been on Langley and path ahead to the Provincials. With the team working hard in practice in preparation for their time on the Big Stage of tournament time in the lower mainland.

You can follow the progress of the Rainmakers at Provincials through the Telus Junior Boys Provincial Tournament website.

Those that wish to tune into the play can subscribe to the Stretch Internet pay portal, which has daily and tournament rates available for those wishing to follow the tournament through to Tuesday.

The Rainmakers open up their 2017 Championship bid with match up against Guildford Park from Surrey on Saturday at 11:30 AM.


Saturday, February 25
Charles Hays Rainmakers 37 vs RE Mountain 50
Rainmakers shift to Placement Round

A very good resource for British Columbia high school sports is Howard Tsumura's Varsity Letters project, the long time observer of high school and university athletics will feature a number of stories over the next three weeks as he follows all of the tournaments that are set to get underway.

An more background on Rainmaker Sports can be found from our archive page here.

Notes on the Provincials can be reviewed below: