The prelude to Prince Rupert's week long festival of basketball that is the All Native Tournament played out on the court at Charles Hays Secondary School this weekend, as the Junior Boys Rainmakers played host to the Secondary School Northwest Regional Zones.

And for fans of the hometown side, the weekend was a resounding success, as the Charles Hays Boys made the most of their opportunities to claim victories in all of their tournament match-ups.

The team left the best for last, as they took on rival Caledonia in the Zone final of Saturday afternoon defeating the Kermodes by a score of 64 to 27.

The Rainmaker path to their return visit to Langley came through wins over Kitimat's Mount Elizabeth and and Semi Final victory over the Kermodes on Friday evening.

The Terrace team earned a second shot at the defending Northwest champs after they bested Mount Elizabeth on Saturday morning, setting up the rematch of the afternoon.

Also taking part in the regional zone competition was the Coast Tsimshian Academy from Lax Kw'alaams, which had hard fought match ups with Caledonia and Mount Elizabeth before the team bowed out of the weekend tournament.

For the Rainmaker Boys, the Regional zones put the cap on a remarkable run through the 2016-17 season as head coach Kevin Sawka's squad travelled across the province to serve notice that the basketball from the Northwest is ready to take on all comers.

The Junior team has a two week break before they take to the Court in Langley, though having made the journey a number of times over the last few years, the Rainmakers certainly won't be flying under the radar as they arrive  at the Langley Events Centre for the February 25th opening tip off.

The Rainmakers have been consistently ranked in the middle of the pack for Junior Varsity basketball since the Christmas period, most recently listed as the number seven team in the province.

After a strong regular season and success at home in the Zones, they'll be keeping their focus on the prospects of a Provincial banner for the CHSS Gymnasium.

According to the website BC Hoop Scoop, Coach Sawka will get a glimpse at the Provincial bracket on February 21st, when the Tournament Committee will release the first match ups with an announcement scheduled to be released at 7 PM

As we get closer to tournament time, we'll offer up a look at the hoopla and anticipation that makes up the Provincials, as well as to explore just what is ahead for the Junior Rainmakers. 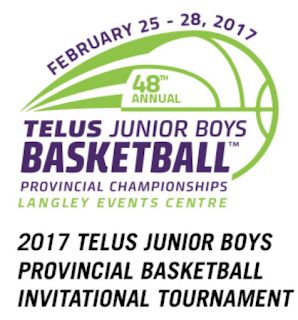 The Senior Boys were also busy this past weekend, as they travelled to Terrace and a pair of match-ups with the Caledonia Kermodes.

The Senior Rainmakers claimed 64-61 and 54-46 victories in the back to back games Friday and Saturday.

The Senior Boys will be looking to book their own trip to Langley for Provincials later this month, when the Northwest Zones take place.

Inclement weather resulted in the postponement for the travel plans of the Senior girls, while the Junior girls had the weekend off.

You can find more items related to Rainmaker sports from our archive page here.