The first look at an ambitious waterfront redevelopment plan was shared with members of the Prince Rupert Rotary Club on Thursday, as Mayor Lee Brain rolled out a 17 foot map to provide a visual look at the many features that came out of last falls sessions with the Ontario based Planning Partnership.

As he was speaking to the Rotarian's, the focus for Mr. Brain was on the immediate area adjacent to the Waterfront Rotary Park, with the Mayor showcasing some of the design ideas from the Ontario based urban planners.

In a media release from yesterday, the Mayor observed as to the approach that both the city and the planning partnership had taken as they explored what the future might look like.

“Taking the time to plan ahead for our waterfront and downtown is a step towards securing future funding opportunities,” ...  “It’s also intended to inspire developers, community groups, and residents about available and attractive areas for potential investment and development.”

As for the various development concepts. the area immediately to the West of the Rotary Waterfront Park could one day be known as Rupert's Landing, with the proposals for that waterfront area to include a lookout structure, canopied plaza and an adventure playground. 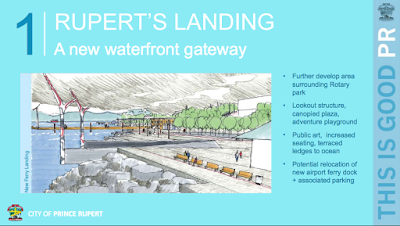 Public art would be a key focus for the area as well as increased seating and a terraced ledge to lead to the ocean shore. As well, there is some consideration being given to relocating the airport ferry dock and providing for associated parking.

The Waterfront focus is part of the larger development plan that the Planning Partnership came up with for the city after their week long visit, other key elements include connecting the waterfront to the downtown area, making use of a Grand stairway that would link the downtown to Rupert's Landing on the Waterfront. 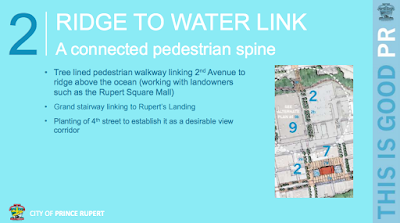 Other areas of the city that are included in the planning presentation were the Cow Bay and Seal Cove areas of the city, as well as a look at some of the trail initiatives that were bounced around during the workshops of the fall. 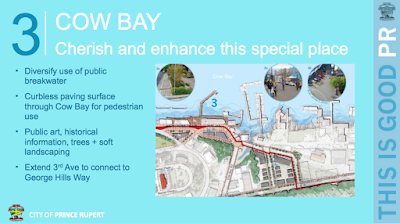 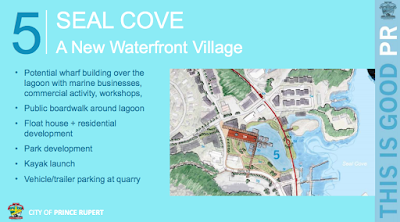 The centrepiece of the planning involves a new vision for the Third Avenue Corridor, which would be re-branded into Main Street Rupert, featuring wider pedestrian sidewalks, bike lanes and a covered events area known as Festival Square adjacent City hall to name a few of the features. 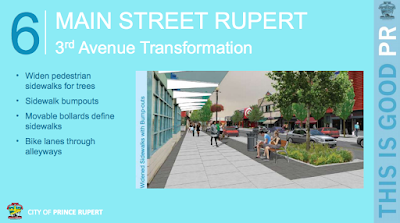 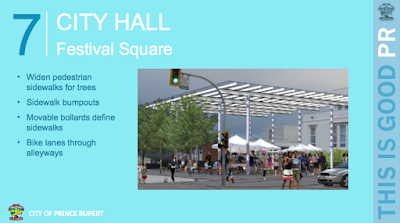 The goal of the downtown focus would be to encourage development of Seniors and affordable housing, respecting the current ocean views and to ensure that there is no displacement of existing residents.

No details are listed as to how much all of the proposed options from the vision plan would cost, or how the City plans could be financed.

Also not indicated is what form of a timeline the city would be looking at when it comes to putting the plans in motion, or in what order they might be considered.

The city has provided a look at the presentation through the City's website which offers up an area by area review of what the Planning Partnership came up with.

You can examine both the presentation items and the map here.

You can review how those community sessions evolved into the presentation of Thursday from our archive features below.

For more items related to the City of Prince Rupert, see our Council Discussion page.
Posted by . at 9:21 AM