Legislature back in session with election premonitions relayed through Throne Speech


The theme of giving back to hard working British Columbians made for the bulk of Tuesday's Speech from the Throne, a Valentine for the voters of the province from the Liberal Government that seems to set the table for next week's budget.

That a project that would appear to be destined to be one that will shower British Columbians with their own cash.

The Speech from Lt. Governor Judith Guichon opened the Spring session for the Legislature, though few expect that MLA's will be in the provincial capital for an extended stay, with the active campaigning for the May election already underway.

Still, theatre is theatre, and there is no better production than the pomp and ceremony of the Throne Speech, a blue print of high ambition for any provincial government, never more so than for one preparing to face the electorate.

Among some of the highlights from the Speech were some snapshots of key issues in in the province; from those we highlight below a number which had a direct mention of the Northwest, or noted concerns for rural British Columbia: 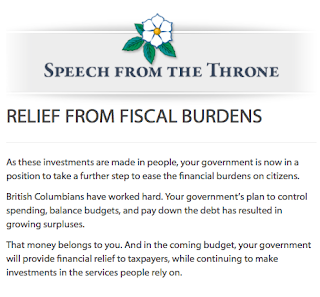 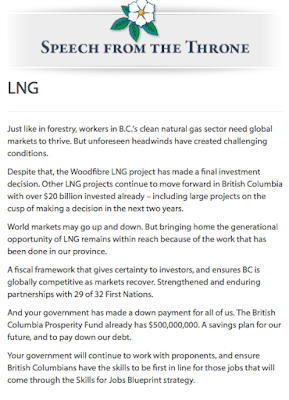 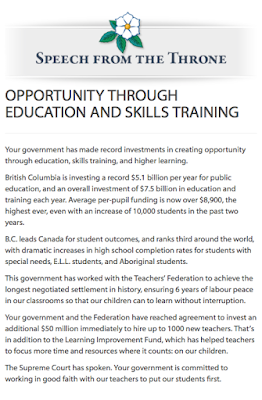 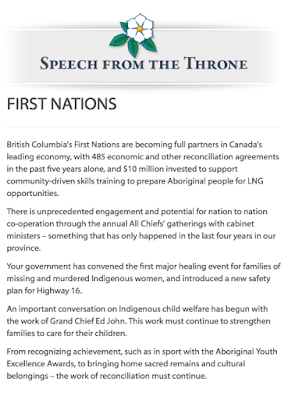 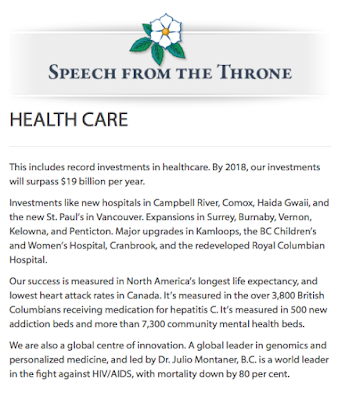 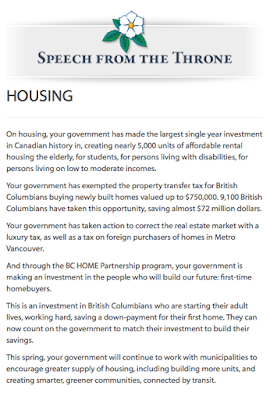 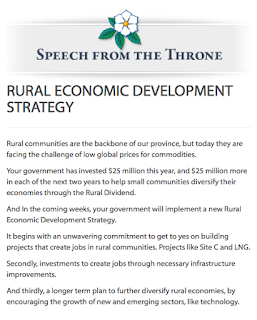 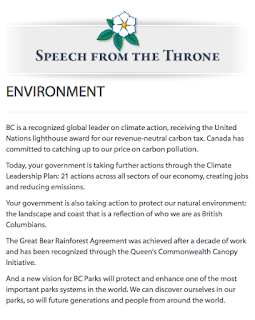 You can review the full Speech below

The Transcript of the Speech from the Throne can be examined here.

Some of the media reviews from yesterday explored many of the themes and perceptions from the Legislature opening.

The Opening of the Legislature Session for the Spring of 2017


One person less than impressed with the Premier's blue print for the spring was North Coast MLA Jennifer Rice, who offered up a few thoughts and a bit of snark through her Facebook page on Tuesday, referring to the Speech from the Throne as vacuous. 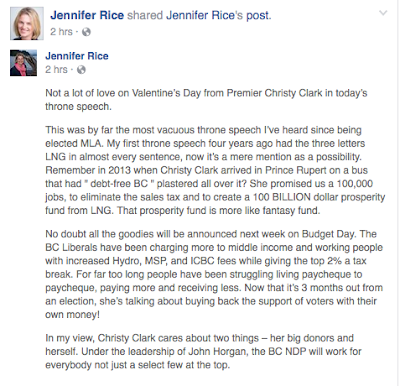 And while the North Coast MLA throws shade at the Premier, (a theme on division that Ms. Rice had addressed in a recent letter to the editor of the weekly paper) we imagine that Ms. Clark has other things on her mind, beyond the observations from the second row of the back bench of the opposition ranks.

In fact, Premier Clark has more important issues to take care of, coming from areas where the Liberals have made for some untimely self inflicted mis-steps.

In recent weeks the Liberals have come out of the gate towards an election campaign by providing for a growing list of items that could pose problems ahead, many set to offer up some long lasting themes across the province as we head towards election time.

One was the Premier's bizarre accusations of hacking directed towards the BC Liberal website, a sensational discussion topic that she had floated last week.

It was something that made for a 48 hour whirlwind of high drama that had the BC Legislature reporters looking for some kind of British Columbia version of the files of the hacking results from the group Anonymous.

A Hacking Scandal, or Political Diversion? 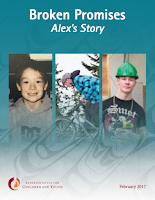 Even more damaging that that however, was a report delivered by the Province's Representative for Children and Youth last week, as Bernard Richard outlined his first review of the status of care for youth in the province.

Mr. Richard who is just now settling into his position, replaced Mary Ellen Turpel-Lafond in late November of 2017. Ms. Turpel-Lafond had done much in recent years to bring attention to the concerns related to the Family Services branch of the government.

Her report of 2015 was one which shocked many across the province as to how out of touch the government appeared to be, when it comes to those in care of the Ministry of Children and Family Development.

The new guy in the office however, hasn't let up on the oversight of the province's seemingly dysfunctional care system. Providing his own case study and raising some alarms of his own through a Report called Broken Promises.

The document (see here) highlights how the Liberal government continue to struggle to find a way to solve the many issues that face those in care. It has long been an issue of much interest from the province's media, and last week offered up no shortage of items for stories and columns.

Children in Care of Youth Ministry


If the Liberals hope to hold off any charge by John Horgan and the NDP, they are going to need to regain some focus on some of the key issues that British Columbians are concerned about.

Offering up strange conspiracy theories and showing an inability to resolve the issues in a key ministry, are not themes that will serve the Premier or her party well heading towards May.

Notes on the provincial election campaign as it moves forward on the North Coast can be found here.

Email ThisBlogThis!Share to TwitterShare to FacebookShare to Pinterest
Labels: Speech from the Throne 2017