Payment Due! As city's utility bills arrive with March deadline

They went down to the last few days of 2016 to put the increases in place and now with the arrival of your mail this week, has come the result of those deliberations from City Council and the delivery of the civic utilities bill for the year ahead.

All week, Prince Rupert residents have been receiving the helpful reminder that it's time to pay the first of of the two stage process of tax collection in the city.

The first item on the tax collection schedule comes from the city's water, sewer and garbage charges, which are now collected at the start of the calendar year, leaving the property tax notices to come later into the spring.

The process of increasing the Utility rates began in December when City council discussed their options, which focused on how the City would split the proposed five percent fee increases per year,

Council devising a formula which would see three percent dedicated towards regular operations, while two percent would be set aside for capital renewal of core infrastructure.

The latter topic was one of key concern for Council, with the City Manager making use of that December meeting to provide City Council members with an overview of the challenges posed by the city's aging infrastructure components.

To ensure that the utility fee bylaw was passed in time for the start of 2017, the city hosted a Special session on December 14th.

At that council session, concerns over how to best develop the asset management plans were addressed by noting that City Council could develop those guidelines over the first three months of 2017.

Though to this point of the City's council year, those topics have not been discussed during the course of the public sessions held to February 20th. So what approach or plan that the Council members have decided on has not been outlined as of yet.

As for how deep you will be digging into your wallet or purse to cover the utilities bill due as of March 31st, a glimpse on that theme comes from a comparison of our utility bill at the home office of the North Coast Review, those numbers show that the total invoice for 2017 has seen a sixty dollar increase from last years billing.

The second phase of the city's taxation plan will come as we move through the Budget process, which is currently underway at City Hall. How those discussions are coming along however is not yet known, as City council members have not made mention of any of the challenges of budget creation during the course of their public sessions so far this year.

A good guideline as to what may be ahead was delivered in January as the BC assessment notices arrived in the mail, providing Prince Rupert residents with an indication as to how their properties have been valued, BC Assessment explains how those numbers may or may not impact on municipal taxation below. 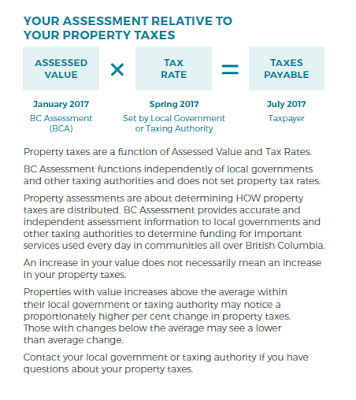 More background on past civic taxation can be found here, while a look at the themes of the City council sessions and other notes from City Hall can be found on our Council Discussion page.
Posted by . at 10:02 AM

Email ThisBlogThis!Share to TwitterShare to FacebookShare to Pinterest
Labels: City utility bills arrive in the mail