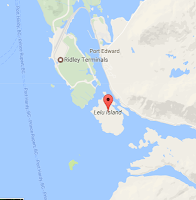 A story originating with a Malaysian state news agency is indicating that Petronas, the parent company behind the proposed Pacific NorthWest LNG project is giving consideration to relocating it's planned export terminal, giving a bit more push to a story that first started to percolate back in December.

The prospect of a potential move was attributed to Petronas Chairman Mohamad Sidek Hassan, who offered up a short quote to the official state news agency Bernama as part of a February 13th article in the publication.

The quote from the Petronas chair, would seem to be confirming rumours from December that had suggested a possible revision to the plan for the export terminal portion of terminal concept.

At that time as we outlined on the blog, it had been indicated that the liquefaction plant for the project would remain on Lelu Island, with a pipeline constructed to relay the LNG for shipment to a dock off of Ridley, eliminating any need to cross over the Flora Bank area of Lelu Island.

There was nothing new in the news story coming out of Malaysia this week, that would indicate that anything had changed with that concept to this point.

The Petronas Chairman, was speaking to reporters at an Economic Governance Forum in Kuala Lumpur and answering questions related to what has been called the latest snag for the LNG company, which is now apparently weighing what impact the potential outcome of the British Columbia provincial election of this year may bring to the proposed development.

Recent observations by BC NDP Leader John Horgan, have indicated that he would prefer to see the entire LNG project migrate to the Ridley site, a political rumination which has seemingly caught the attention of the Malaysian company officials.

Last Friday, the NDP leader spoke to a Vancouver Board of Trade luncheon event and following his speech told reporters that the Petronas project for Lelu Island was 'poorly sited", adding that if he were successful in his quest to become Premier in May that he would "find a better place and a better way" to build the gas export terminal.

A video of Mr. Horgan's appearance at the Board of Trade, can be found from their Facebook page and while the video clip provided doesn't feature his thoughts on LNG, North Coast residents will find his comments related to infrastructure funding of some interest.

Mr. Horgan also outlined his thoughts on LNG development and other issues as part of a half hour interview with Vaughn Palmer of the Vancouver Sun.

As for the latest development in the long running Pacific NorthWest LNG story, whether Mr. Horgan's comments will give cause for a larger scale revision towards the proposed development by Petronas officials remains to be seen.

For now however, the latest note from the south pacific has already started a flow of news stories first from the Malaysian business press and now crossing over to Canada,  all of which reflect the new theme towards its potential development.

More items related to the Pacific NorthWest LNG project can be found on our archive page here.
Posted by . at 11:00 PM