When they settle in for Monday's City Council session, the city's elected officials will be asked to review and support a motion on the theme of furthering Adult education options in the province.

The motion is part of cross B.C. call to endorse a student led campaign to reinstate funding for Adult Basic Education at the provinces post-secondary institutions.

On the North Coast the initiative is being led by the Northwest Community College Student's Union who will submit the correspondence for the city to consider.

As part of their submission for council, the NWCC students provide some background to the issue, which relates to a reversal of a policy in December of 2014 by the BC government, a decision which eliminated access to free basic education for adults and instituted a new fee process for the program.

The Students union is joining the call of the British Columbia Federation of Students to have that free access reinstated, calling their campaign Don't Close the Doors.

You can review their request to council below, the letter to council is included in the Agenda for Monday's Council session. 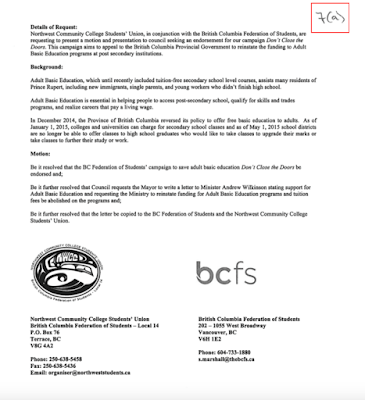 As part of their request to council, the NWCC Students union is asking that the City offer its support to their initiative and for the Mayor to write a letter to Minister Andrew Wilkinson offering the city's request to return the funding for the program and abolishing the existing tuition fee that is in place.

Further background on issues related to post-secondary education in the Northwest can be found on our archive page here.

For more background on notes from City Council see our Council Archive here.
Posted by . at 11:53 AM