Success as they say has many authors, or at least many cheerleaders, and as the 2017 Provincial election campaign begins to gain some traction, the city's current industrial jewel of the Fairview Container Terminal is making for some early talking points.

Short of standing in front of the gates for photo crews, both BC Liberal candidate Herb Pond and incumbent MLA Jennifer Rice have made the industrial engine of the region their own shining star, pointing to the container terminal as a key ingredient of economic growth with the promise of more jobs to come with eventual expansion.

Mr. Pond was the first out of the gate to make use of Fairview in his electoral material, providing some notes on a recent CBC radio interview he gave to a Cape Breton program, where he recounted how the Port of Prince Rupert brought the forward the vision of turning the little used break bulk dock into the thriving hive of activity that it is today.

You can hear that interview from this link.

A link to the interview and the 8 point plan towards container port development was recently featured on the Liberal candidates Facebook page. 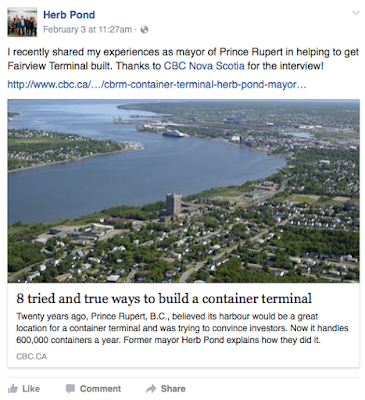 Ms. Rice took her turn at the Fairview theme during the Wednesday afternoon session in the Legislature, using her time for Standing Orders (and with some representatives from the Port in the gallery above) to proclaim her support of all that Fairview has accomplished  and looking to a prosperous future to come.

She noted the achievements of the Fairview Terminal and the Prince Rupert Advantage that it offers, observing on the prospect of it's Phase 2 expansion and the jobs it will provide for both local and First Nations residents.

Ms. Rice pointed to the certainty of the Port efforts, going on to add that the projects such as the Fairview expansion are happening now while the discussion continues on whether a "certain industry comes to fruition or not"

The NDP MLA was quick to make sure that her presentation to the Legislature was included as part of her social media notes from Wednesday, adding the notes to a YouTube video page. 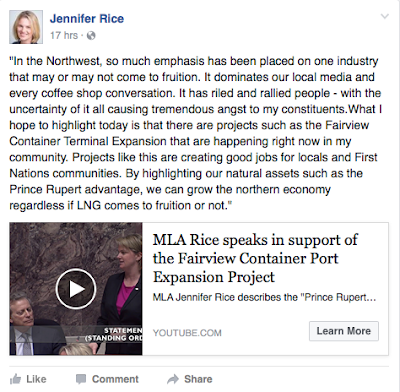 The tributes to Fairview make for easy talking points for both politicians, the terminal has been a success story from the day it opened and its importance to not only the Prince Rupert economy, but that of all of Northern British Columbia is pretty obvious.

What residents of the North Coast riding might be looking for however as they consider their options for election day, is what ideas the politicians have to expand on the local economy.

With residents looking to see if either have some new ideas for ambitious development, a review of existing industries and how to make them stronger, or some suggestions as to how such local discussion topics as Watson Island may return as job creating instruments for the region.

More notes on the 2017 provincial election campaign can be found on our archive page.

Email ThisBlogThis!Share to TwitterShare to FacebookShare to Pinterest
Labels: Fairview Terminal as a political talking point