For City Council, it's becoming a case of Government by Announcement

The first two months of Council watching for 2017 is offering up some interesting themes and subtle changes from previous years.

As the city's elected officials seem to be shifting towards taking more of their work behind the scenes, than speaking to it during the twice a month Council public sessions, on those occasions that they have twice a month council sessions.

The main result of that shift is that Council meetings have become significantly shorter and bereft of much in the way of discussion on the the major items as has been found in years past.

So far in 2017, City council has hosted three public sessions of 41, 57 and 33 minutes and cancelled one public session owing to an inability to finalize items for the Agenda.

The late January meeting marking the second time in three months, that City made note that they had no Agenda topics for discussion in a regular council session.

For the most part, the result of these shorter meetings means that it seems that many initiatives rarely get discussed in public session anymore.

Instead we receive word of them through an announcement mainly by way of the Mayor's Facebook page, which appears to be the go to location for any civic notes of late, the city's own website now receiving only an occasional entry as part of the city's information stream.

The latest glimpse of the new focus from the City's Facebook administration concept came yesterday, as the Mayor celebrated the announcement by the Province that a contract had been awarded to a Penticton firm for the upcoming major road project that will take place along McBride, 2nd Avenue West and Park Avenue to Fairview.

The Mayor added his own notes to the province's announcement, outlining that the city would also be taking advantage of that project's delivery, with Third Avenue to be paved as an add on the main job. 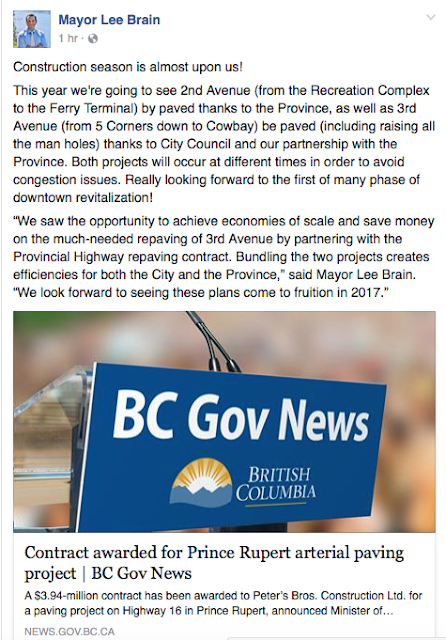 That update that linked to the provincial notice, would seem to suggest that the Third Avenue project will be handed over to the Okanagan firm, though how much discussion Council held on that theme we may never know.

Other than a brief mention in the last meeting from December that the city was considering the project, the Third Avenue plans have not been part of the conversation as part of the three public council sessions held so far this year.

In his Facebook notes, the Mayor makes mention of how the City has saved money and achieved economies of scale, but Council has not shared the details of those observations in public.

Nor do we know if Mayor and six Council members weighed the benefits of tagging on to the province's out of town contractor, against what a local contractor might have been able to offer for the same job, creating local employment and using local supplies.

Maybe there was a lengthy exchange of the pros and cons, but if there was, it was in a session held outside of the regular Council meeting with the decision made outside of the public gathering.

Another example of the new approach to decision making, came with the way that the City has engaged in the Community Grant announcement process.

With the first indication as to how the City was funding those community organizations  coming with the announcement of the three year agreement between the City and the Lester Centre, which was negotiated through the fall.

It has delivered a process which came with few updates provided in public session as to how this new arrangement will change the nature of the funding process, or how it benefits the city and its taxpayers. 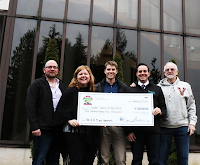 As has been the case in a number of past instances, the first word of the successful negotiations came once again through the Mayor's Facebook page and not from the public chamber of Council, with the Mayor and a few members of Council featured in a photo holding the always popular giant novelty cheque for such occasions.

Though one imagines that one hint as to the partial list of the roll call in support of the vote, might come from those that found the time to take part in the cheque event.

Still to be released by Council is an update on what the funding arrangement with both the Museum of Northern British Columbia and the Prince Rupert Library might look like.

With neither of those large scale grant applications making for discussion in any of the public sessions as far back as November of 2016. 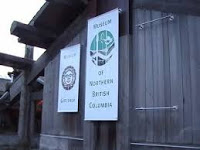 To this point, we still do not know if those two groups have also negotiated a long term arrangement as has been completed for the Lester Centre, with little heard from Council members as to what they think of the concept or how that process has moved forward.

As Council discovered back in January of 2016, issues such as Library funding and other grant requests do capture the attention of the public, who at that time were quick to share their opinions at the how the city handles funding issues.

Beyond the big three grant recipients, there is also a list of smaller organizations that receive grant money and as we head towards the end of February, there has been no further background as to the status of that process, or to how much each organization will receive courtesy of Prince Rupert's taxpayers.

With the City now actively moving into its Budget Discussion period, there has been no discussion of themes or concerns as part of the first two months of Council sessions, offering no indication as to a timeline for community consultation on the issue, or what the indications are for potential tax hikes for the July tax property tax deadline.

Considering the length of the scheduled public meetings have been so short since January 1st, and in one case a meeting cancelled, the topic and sample of Council opinion on budget issues could probably have been plugged into an Agenda item somewhere along the line.

Instead, the background information on any of the topics from the public sessions was light, though the announcements continued to flow through social media

Just last week, in a fashion similar to the Lester Centre funding announcement we once again learned of a recent agreement between the City and the Kaien Trails Enhancement and Recreation Society.

It appears to be a project that should rightfully capture the imagination of the community, but one that does leave a few questions to consider, particularly when it comes to turning over civic land to an outside community group.

What input Council had, or questions that they may have asked are left for their discussions outside of the public session, with no indication if all were in agreement on the lease arrangement.

No one would be against the development of a community asset such as the Rushbrook Trail, however the process of moving it into the hands of a community group and what cost, if any that there may be to the city, is something that might have been made part of the public process.

While the Council meetings themselves have become quite shorter, another more prominent addition to the public sessions comes from the the City Administrator, as Mr. Mandryk takes to the microphone to proclaim that "Council is pleased to announce" ...

An indication which usually then involves a release of information from one of the Closed sessions of recent months.

The most recent dispatch from those closed sessions provided for as much intrigue, as it did information. As the Business Advisory committee that Councillor Blair Mirau has been steering towards launch, finally released the names of those that were participating in the project.

Though it was with interest to note that from that release from closed meeting, there was one voice of dissent on that announcement, coming from Councillor Joy Thorkelson, who expressed her opposition to some aspect of the project. However, as the topic was conducted through a closed session, the public did not learn as to the nature of her objections, only that she apparently had some concerns related to the topic.

Now granted not every topic is a significant issue and rambling through proclamations and talking points on others would make for a tedious council session, but there are issues that warrant far more public discussion than is the case now.

And when it comes to such large issues as the Community Grant or Budget process, or information about many of the Civic investments or departments there is clearly a need for more detail from our elected officials.

Councillor Cunningham noted of the need to provide residents with some of that information back in January when he called for more public updates for Council sessions. Suggesting that Council request that department heads and others with pertinent information on civic issues make presentations to city council, a recommendation that so far has gone unheeded.

The impact and optics for council members when it comes to this new dynamic of sharing word of Council's work should be one they might want to consider however.

With all information now seemingly being funnelled through the Mayor's official Facebook page, the remaining six council members are becoming somewhat marginalized

For the most part, the shift of attention is leaving the residents of the city uninformed at to how the six elected officials view things on any number of topics, making the council members mostly there for the background in the eventual photo display.

In recent weeks, the only contribution from the other Council members has been left to the dying minutes of the three council sessions, as they wrap up the night by raising an item, or two that has captured their attention or one they might have some concerns on.

But, by not engaging publicly in the larger issues that they face, they for the most part are slipping further and further into the role of bit actors when it comes to contributions to Council sessions.

That process is not one that would seem to serve the goal of providing information to the public in a very helpful manner and timely manner.

With this dedicated reliance of the release of information through a social media portal and not from the public sessions from the hall where the decisions are being made, it at times it seems as though City Council is moving more along the lines of a Politburo, rather than that of a place of Public Assembly.

More items of note from Prince Rupert City Council can be found on our Council Archive page, with discussion themes explored here.
Posted by . at 12:07 PM

Email ThisBlogThis!Share to TwitterShare to FacebookShare to Pinterest
Labels: How the city is delivering its information these days