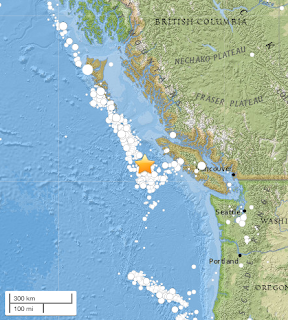 It has been a busy evening on the Pacific fault lines of British Columbia and Washington State.

Two temblors were recorded in the span of an hour, the seismic energy seemingly moving in a Northwest direction over the course of the sixty minutes.

The first was a 4.2 magnitude quake that struck just West of Seattle just before 9 PM, it quickly became the talk of social media from Washington State and Southwestern British Columbia into Wednesday evening.

One hour later, at 10:04 PM a second quake registering at 4.8 magnitude was recorded off the West Coast of Vancouver Island, 166 kilometres southwest of Port Hardy and some244 kilometres North of Tofino.

The temblor off the B.C. coast had a depth of 10 kilometres, it marks the latest in a cluster of similar sized quakes that have struck the fault line running along Vancouver Island and North to Haida Gwaii.

You can review our archive of recent seismic movements here.
Posted by . at 11:10 PM