The Provincials are still a week away for the Senior Girl Rainmaker squad at Charles Hays, but they already have an idea as to the the challenge ahead when they make the trip to Langley for next Wednesday's Provincials opener.

The opening draw match ups were released on Wednesday night and for the Rainmakers the fist fame on the tournament sheet will see them taking on Vernon in a 3:30 game On March 1st at the Langley Events Centre.

Howard Tsumura from Varsity Letters and Chris Kennedy hosted the Senior Girls Draw presentation program, providing a look at all sixteen teams that will be vying for the Championship banner.

Leading the group of 16 are the two teams considered to be the favourites as the ice breaker next week arrives, with Seycove and Langley Christian ranked at number one and two, leading the pack of the two divisions for next weeks event.

The pair also offered up an indication as to the competitive match that awaits the Rainmakers as they take on the Vernon squad, with the Panthers ranked at third also considered to be a team that many think will be close to the final spot when the championship game arrives on March 4th.

The Rainmakers head into that competition with listing of fourteen prior to the opening tip.

Now that they know what their first game looks like, coaches Anna Ashley and Sarah McChesney can start to work on some plans to take on the challenge that the number three ranked Vernon squad might pose.

Toppling the Okanagan squad in the first round would set a good pace for the Senior Girls and announce their arrival at the tournament in a pretty spectacular style. 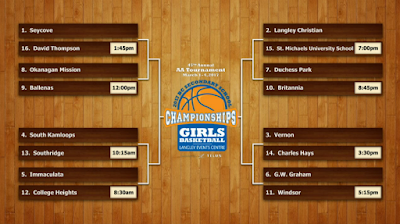 As we get closer to next week's tournament we will set up a Tourney archive page much like we have for the Junior Boys Rainmakers who launch their Provincials quest this weekend.

You can review out notes on that journey from our blog item of yesterday.

One more team is looking to book their travel arrangements for March in Langley, with the Senior Boys Rainmakers on the court this weekend as CHSS hosts the Northwest Zones.

To keep up with all the developments with the Rainmakers see the CHSS twitter feed here.

More items of interest on Rainmaker sports can be found on our archive page here.
Posted by . at 8:55 AM

Email ThisBlogThis!Share to TwitterShare to FacebookShare to Pinterest
Labels: Sr Girls Rainmakers hear of their first round competition