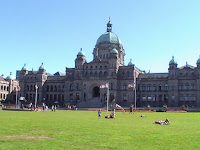 Last week's Debate following the Speech from the Throne built on the theme of LNG development and what kind of change it could bring to the North Coast and Northwest as Deputy Premier and LNG Development Minister Rich Coleman offered up a few hints as to how the BC Liberals may be approaching the debate for Northern British Columbia.

Mr. Coleman spoke Thursday afternoon to the recent signing of Benefits Agreements with both Lax Kw'alaams and the Metlakatla First Nation, providing some wide ranging commentary that outlined how the BC Liberals view the path forward for not only those two communities, but many others across Northern British Columbia.

The Deputy Premier was in full oratorical flight after taking some barbs from opposition members across the aisle, with the NDP's Doug Routely from Nainamo-North Cowichan in particular taking the government to task over it's development and economic agendas.

Mr. Coleman addressed those issues by highlighting some of his observations from a recent trip to Central America and how conditions compare to some Canadian First Nation communities, noting that the situation can change for British Columbia.

That theme proved to be a bit of a controversial aspect of his presentation to the legislature, causing somewhat of an uproar in the chamber as the Deputy Premier transited that theme towards his travels to dozens of small communities in Northern British Columbia.

From those trips to the Northwest and along the Highway 16 corridor the LNG Minister outlined how from his perception, the prospect of the large scale investment in those cities, towns and villages is one that will bring generational change.

On that theme, Mr. Coleman provided his overview of the recent agreement with the two North Coast First Nations, while noting that how he sees it, the NDP members from the three Northwest ridings are perhaps not listening to the leadership from those communities.

I would have loved if the member for North Coast, who is abjectly, locally, totally opposed to any economic development when it relates back to anything like natural gas, propane — any of those things — and is public about it…. I would have liked to have seen the members for Stikine and Skeena there yesterday to hear from these people how important they see this as part of their future.

Mr. Coleman also observed how First Nations leaders are looking to move forward to create opportunities for the people and to address social issues in their communities.

If you've been to the Lax Kw'alaams, if you've been to Metlakatla and a number of the First Nations at Carrier-Sekani, you'd sit down with the chief. One chief said to me: "It's absolutely sinful — our education rates and our graduation rates." He is thrilled that now he has a pilot project. He's got $500,000 a year for tutors to take his kids and educational success from grade eight to nine to graduate high school.

And where does that come from? A benefit agreement relative to natural gas. I know you don't care, but I do. I'd like you to sit down at the table. Just before Christmas, I sat down with the chief who said: "We've got to get on with this because I've had five suicides in the last month in my community. It takes me an hour and a half to drive from any place to shop for my people, to get anywhere." You're opposed to liquefied natural gas.

Other Key elements of note related to his thoughts on the prospects for the North Coast included:

The Metlakatla and Lax Kw'alaams that were here yesterday are hoping and cooperating with the company, the port and the community, signing a benefit agreement that they know will generationally change the outcomes for their community ...

You've never seen anything like these negotiations in B.C. But if you sat in a room and talked to these guys and looked them in the eye, you would be stunned by how much love they have for their communities and the hope that their children and their grandchildren will have a better life.

Coleman also reinforced the Liberal position that the NDP opposition is against any form of LNG development, something that would appear to be a theme for government heading towards the upcoming Provincial Election.

So if you're a First Nation living in close beside two or three million people, like the First Nations in the Lower Mainland, who pursue economic activities that can be done because they actually have a population for some of the things they want to pursue, or the south Okanagan where you can farm and wineries and all those sorts of things….

It's completely different from a community of 250 people, an hour or an hour and a half out of Vanderhoof, who are sitting there getting about $280 a month from the federal government. They get less than somebody off reserve on social assistance.


The prospect of employment opportunities also made for a portion of the lengthy commentary from the Deputy Premier, who followed up on his themes of the day on how it offers an opportunity for First Nations to become more involved towards their future independence and economic development.

This is important stuff. Everybody wants to talk about resource management, and they want to talk about how much in taxes people can…. All of these things will benefit British Columbians, but don't lose sight of the fact that in a small First Nations community in northern B.C. where 60 percent of young people are unemployed, their income is $280 a month. It's lower than in Nicaragua, and that can change. The jobs can change, the training can change, the opportunity can change, and it can only change with opportunities and working with First Nations.

With the Legislature set to resume it's proceedings today, Ms. Rice may at some point be offered an opportunity to provide her rebuttal to the Deputy Ministers observations and themes.

You can review Mr. Coleman's full commentary to the Legislature from the Hansard Record starting at the 16:30 mark.

More background on items of discussion at the Legislature can be examined here.

For more items related to the 2017 election campaign on the North Coast and Northwest see our archive page here.
Posted by . at 11:44 AM

Email ThisBlogThis!Share to TwitterShare to FacebookShare to Pinterest
Labels: LNG makes for opening debate theme following Speech from the Throne