By car, plane and boat, Players and fans from across British Columbia and points North in Alaska, all are in the process of making their way to Prince Rupert.

Their destination set for the Russell Gamble Gymnasium and Arena of the Jim Ciccone Civic Centre, where the week long festival of basketball and First Nations culture that makes up the 58th edition of the All Native Basketball Tournament will take place.

51 teams will take to the court in the week to come, all of them looking to travel through the course of the seven days of play culminating in next Saturday's final match ups set for the Four Divisions that make up the tournament.

One of the most anticipated events on the Prince Rupert calendar, the tournament launches on Sunday with four games in the Women's Division opening draw.

The Sunday ice breaker sets the scene for the always memorable Opening Ceremonies which are scheduled for 8PM, with the doors to the Civic Centre opening at 7.

The Opening Ceremonies make for one of the signature events for the All Native Tournament, with the Ceremony providing for the welcome for those that have travelled to the North Coast, as well as for those teams based in the Prince Rupert area.

Tickets for the Opening Ceremonies, if any are still available, can be purchased at the ANBT office at 259 -Third Avenue West.

Prior to the Sunday events, coaches and Managers will gather in the Auditorium of the Civic Centre to review any last minute instructions on the way to the opening tip for the Sunday play.

The teams return to the court in full force on Monday, when the Basketball takes the spotlight for six days of competition, offering up a schedule of non stop hoops from morning to night, with each win or loss telling a story that sets up the next match to follow.

Friday, February 17th at eight PM brings an opportunity to salute the past, as the All Native Tournament enshrines four new names into the Hall of Fame.

Set to receive their honours and take their place with the greats of the past will be:

This year's ceremony will mark the final time that the Hall of Fame induction event will fall on a Friday, next year tournament organizers will be shifting the celebration of the past to the Wednesday night of the tournament.

In addition to the fast paced action on the courts, the Civic Centre will also be a cultural centre for the community for the week. It offers both visitors and residents of Prince Rupert with the opportunity to see what the vendors participating in this years event have brought with them for the trip, as well as to sample a range of food options as part of the week long celebration.

Tournament passes and individual tickets are available at the All Native office.

You can find out more when it comes to ticket availability from the Tournament office, they can be contacted at 250-627-8997.

Tournament updates can be found from the ANBT website or the ANBT Facebook page, though it is the latter that appears to have the more frequent of updates of those two options.

You may also see some tournament notes offered up through twitter as the week goes forward, with #ANBT2017 an option for those that use that social media platform.

The controversial involvement of LNG proponents won't be part of the storyline for this years event, with tournament organizers calling the issue contentious and announcing their plans to drop the sponsorship from LNG firms back in December.

As part of that decision it was also indicated that no political messaging of LNG development would be allowed by teams participating in the tournament, with organizers hoping to keep the focus on the basketball and celebration of the participating First Nations.

However, one controversial issue will remain part of the narrative for the week long event, as tournament organizers continue to prohibit Josiah Wilson from participating in the event.

It marks the second year in a row that the Haitian born player, who had been adopted into a Heiltsuk family at the age of five months will not be allowed to participate in the tournament.

His banishment will once again keep the tournament's controversial blood quantum rule in the spotlight, that part of the ANBT rules provides guidance as to who can participate in the event.

The issue is something that seems destined to spark much discussion and debate as the week progresses and will also likely to receive some media attention through the seven day's of play.

As they have for a number of years now, CFNR will be the host broadcaster for the tournament, besides the play by play of many of the games through the week, the Opening Ceremonies and a number of features that celebrate the tournament will be both broadcast on radio and streamed by video through the CFNR website over the course of the next seven days.

Besides making the Civic Centre complex a reunion hall for much of the week, the All Native tournament is a major economic boost for the Prince Rupert area, with hotels, restaurants, clubs and local stores set to welcome the large numbers of visitors that will increase the population of the city over the next week.

Tournament week brings a definite buzz to the city's streets, with the city's night life shifting into a festival mode for the duration of the week long event.

Once the tournament is underway and as results are made available, we will update our All Native Tournament Results Page, which you can review here.

A link to the Scoreboard can also be found as part of our North Coast Review Extra Edition section on the right hand column of the blog.

Our Host archive page features a number of stories from the lead up period of the tournament, we will be adding to that archive as well through the week, offering up links to a range of stories of interest that shape the events of tournament time.

To get a glimpse of the path ahead for the participants, a look at the draws for the Four Divisions can be found below: 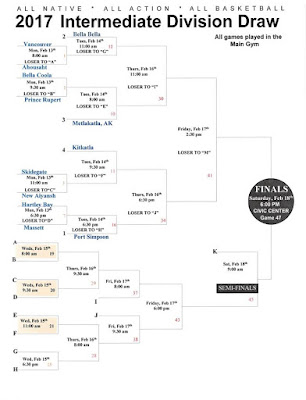 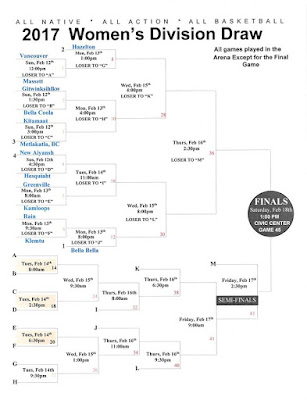 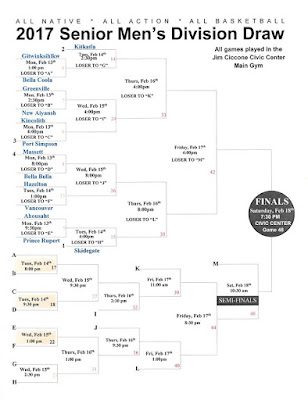 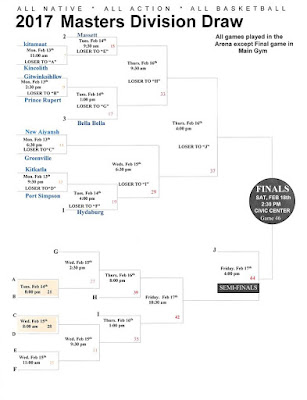 Email ThisBlogThis!Share to TwitterShare to FacebookShare to Pinterest
Labels: ANBT 2017 February 12 to 18