A political pit stop as the All Native Tournament gets underway


Sunday night was Opening night for the 58th Annual All Native Basketball Tournament, the early afternoon play of the Women's Division set the basketball action into motion, while the highly anticipated Opening Ceremonies brought the welcome to one and all that have travelled to Prince Rupert to take part in the week long event.

While some of the audience and players were still in transit owing to weather delays for transportation options, the crowd was still a large one inside the Russell Gamble Gymnasium as the tournament received another impressive opening.

The Opening Ceremonies, which were streamed live across the province by radio station CFNR, featured drumming and the march in of the athletes, as well as some solemn observations from tournament organizers and officials on the gathering and its importance to all nations that were participating.

The evening also provided for an impressive array of dancing from the number of First Nations groups taking part in this years tournament, with some popular groups returning to Prince Rupert once again to share their spirit of the celebration.

And as is the case whenever you bring a large crowd together with politicians, there were speeches to be made and photo ops to be snapped as the tournament launched for 2017.

Though, fortunately for the audience, the politicians wisely kept their comments short and for the most part focused on the basketball to come.

Prince Rupert Mayor  Lee Brain's observations focused on a welcome to Prince Rupert for the participants and a short update for those in the audience on the city's plans for the McKay Street park, which the Mayor noted included a covered basketball pavilion where ball could be played 24/7.

While he offered up no timeline for the audience as to when that ambitious development plan might move forward, he did outline that some fundraising is planned for this year, as the proponents of the McKay Street Project seek the resources to bring the abandoned baseball field back to community use.

North Coast NDP MLA Jennifer Rice took a few seconds to recount her time in office over the past four years, while making a short pitch for re-election, before observing that it wasn't a night for politics.

Among some of her themes were comments on community and shout outs towards a number of the villages that she had visited through the year.

She however didn't stray too far from political themes however, noting that both NDP Leader John Horgan and MLA Melanie Mark who is of Nisga'a ancestry, were both in attendance for the special night.

Both Mr. Horgan and Ms. Mark would later be invited to the floor to offer up some comments on their visit to the North Coast and their thoughts on the importance of the week long tournament and cultural event.

NDP MP Nathan Cullen was also on hand to offer up a few words, making note of the brand new floor that was in use for this years tournament at the Civic Centre, reminding the audience that he had mentioned the need for a new one at last years tournament.

He followed that observation up by noting that the City of Prince Rupert had delivered on that new floor and like a good politician, he self-depreciatingly noted was there to share some of the credit.

The MP also raised a few eyebrows and gained a few laughs with a note on how the population may increase in many communities next November following the week long festival in Prince Rupert.

Mr. Cullen also noted that if any team might be short a player, he could slide into a roster spot, noting that much of his play however comes from the left side of the court.

In an era of social media, the participants in Sunday's opening event were quick to their Facebook and twitter feeds to share the moment with followers across the province and beyond.

Some of the shout outs can be reviewed below
(click to enlarge): 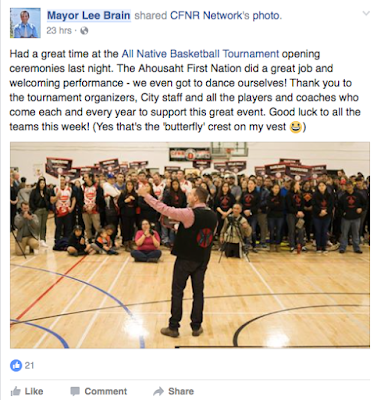 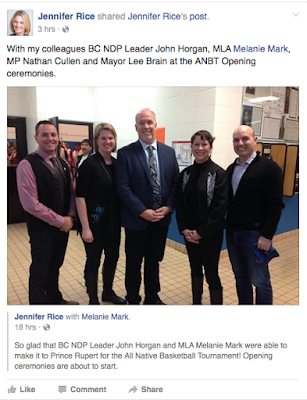 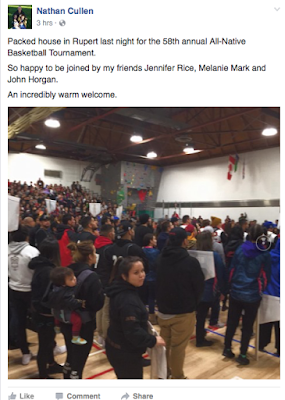 And while he was not offered an opportunity to speak during the course of the Opening Ceremonies, Herb Pond, the BC Liberal candidate and former Mayor of Prince Rupert was also in attendance taking in the Sunday event with his wife Sandy. 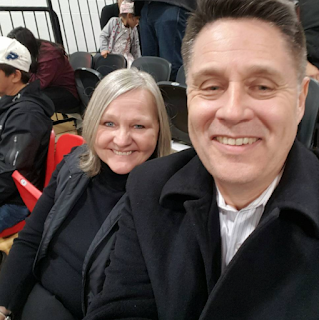 With all of the politicians out of the way for now, fans and participants can get back to the main purpose of their travels to Prince Rupert, as the All Native Tournament heads into the third day of fast paced action on the courts of the Jim Ciccone Recreation complex.

You can review the past results and check out the schedule ahead from our ANBT home page.