There is good news for the residents of the Terrace area this afternoon, with an announcement from Finance Minister Mike de Jong that a new hospital is on the way for the community an hour and half east of Prince Rupert.

The Finance Minister made the announcement Tuesday while providing a Budget 2017 update for the Terrace and District Chamber of Commerce, as part of his comments de Jong noted that the provincial government had taken notice of the efforts from the Terrace region to make the case for a new facility.

“The Province has heard the calls from residents about the need for a new hospital in this community,”  .. “A new facility will support this region, and the families that live and work in the region.”


Few details were outlined as to what the new hospital may look like, though it was revealed that earlier this month Northern Health had provided an updated concept plan to the Ministry of Health regarding the process of planning for a new hospital in Terrace.

It's expected that the work on the business plan will start in the fall of this year, with a timeline of 12 to 18 months leading up to procurement and the start of construction, which would seem to suggest that the first shovel won't hit the ground until the late summer, or early fall of 2019 at the earliest.

Harry Nyce, the Chair of the NorthWest Regional Hospital Board outlined the Board's enthusiasm that comes from today's announcement.

“The North West Regional Hospital District is encouraged and delighted to see the next steps being committed to by the Province in the process of working towards the replacement of Mills Memorial in Terrace,”  ... “The replacement of Mills Memorial has been the number-one priority of the North West Regional Hospital District Board for many years. This new hospital will benefit all northern residents by increasing access to timely quality health care, the key variable to our regional growth.”

Also not disclosed today was to what level of service the new facility will operate as, during the course of the Terrace campaign to replace the hospital there were calls to make it a Level Three Trauma Centre for the Northwest.

A potential shift in the health care dynamic in the region that was of some concern to Prince Rupert City Councillor Barry Cunningham, who shared some thoughts at a recent Prince Rupert Council session.

Prince Rupert and other communities along the North Coast will no doubt be happy to hear of the province's plans for the aging facility in Terrace which was clearly in need of replacement.

However, North Coast officials whether they represent municipal, regional or provincial interests will have to keep watch that health services on the North Coast don't suffer, and that other areas of the region don't see reductions to their services, or funding as a result of the coming push for the new facility.

Mills Memorial was built in 1961 and has 44 acute care beds along with a range of medical services including cancer and kidney care, maternity services and a number of medical imaging services.

As we noted on the blog back in January, the campaign to raise awareness of the need for the new facility was one that embraced the entire community, with an impressive media campaign launched to get the message out, one clearly heard by a provincial government that is hopeful of claiming the Skeena seat in the Legislature in the May election. 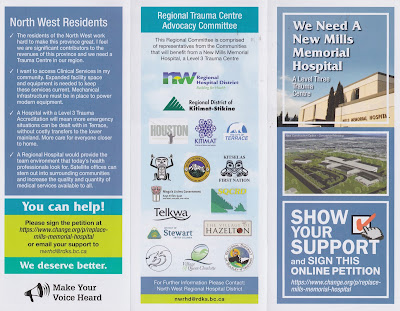 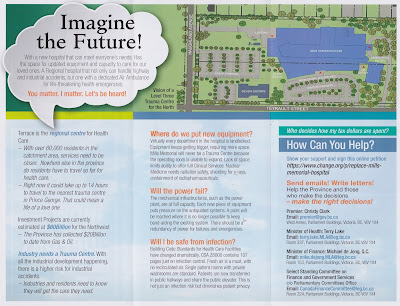 You can review the provincial government's announcement here.

More items related to health care in the Northwest can be found on our archive page.