Earlier this week Finance Minister Mike de Jong donned his re-soled shoes and walked through the Legislature to the Chamber to deliver the financial blue print from the Liberal Government.

It's a document which sets the course for the governments plans for a year ahead, but in reality is but a temporary document until the May election, one which will gain the approval or dismissal of the voters as they make their way to the polls.

The theme of giving back to the people of British Columbia, which appears to be the working concept for the Liberals heading into the election run up, was present through much of the document reinforced in Mr. de Jong's opening and closing comments from Tuesday.

The dividends of prosperity are not just about new program and service investments. It’s also about making sure that British Columbians are able to keep more of their hard-earned money in their pockets. It is also about giving back.

Among the main points of note from Mr. de Jong was more funding for education and health care, the latter featuring a political carrot for voters, with one of the key talking points the announcement of a reduction by 50 percent in the premiums for the province's MSP medical system, with an eye towards eliminating the user fees at some point down the road.

Additional funding towards care for children and families was also announced, acknowledgement that it was an area where the Liberal government has been under considerable pressure owing to a number of poor reviews on how they have handled that file. 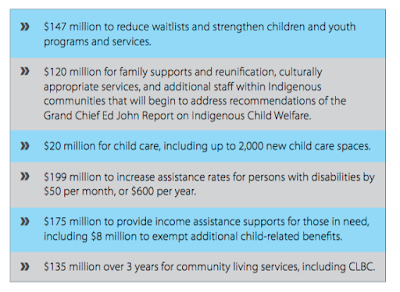 Housing, which directly impacts on their apparent theme of hard working British Columbians is also an area that Mr. De Jong addressed, though a number of initiatives for those that own homes, are looking to buy one or rent. 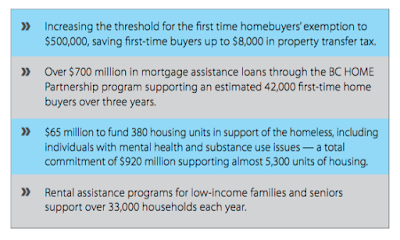 Infrastructure funding and development, a cut on the PST on electricity for small and medium business, debt reduction strategies and notes on taxation were among some of the other topics addressed during the course of the Finance Minister's address.

You can examine the details from Tuesday's Budget Speech from a range of options on the Government of British Columbia website:

Through our political portal Darcy McGee we have compiled the reviews of the budget since Tuesday's presentation, with much in the way of commentary and observations to be found from our Victoria Viewpoints features below:

Mr. de Jong also appeared on the British Columbia political forum of Voice of BC, speaking for an hour with host Vaughn Palmer to go over the background to the budget issues.

For the North Coast election campaign, Mr. de Jong's financial plan has made for another conversation topic for the candidates in the current quest towards the May election.

With both the incumbent MLA Jennifer Rice and Herb Pond her competitor for the Liberals offering up their first look at the government's financial blue print.

North Coast MLA Jennifer Rice was quick to her Facebook page to share her first impressions of the Liberals budget planning, and for Ms. Rice there was much missing from the Liberal agenda for 2017. 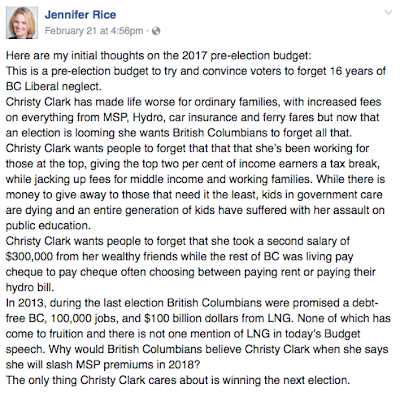 She followed up those comments with some media appearances around the Northwest to reinforce the NDP position of a Liberal government that is still not delivering for the people of British Columbia.

Liberal candidate Herb Pond also made use of social media to get his early thoughts (and a link to the budget document) to would be voters, offering up a short synopsis of the days budget notes on the theme of electing an MLA to make sure that the Northwest gets its share of the province's initiatives.

Mr. Pond's media appointments through the week took note of some of the recent news related to BC ferries that came out of Victoria.

The budget plans will most likely make for some of the backdrop for the upcoming campaign across the North Coast as both Ms. Rice, Mr. Pond and any other candidates that may enter the contest try to stake out some ground on how best to deliver results for the region.

A look at more notes from the Legislature is available here.

You can follow the progress of election campaign from our North Coast Votes feature here.

Email ThisBlogThis!Share to TwitterShare to FacebookShare to Pinterest
Labels: North coast candidates reaction to BC Budget 2017