The Province of British Columbia announced the successful contractor for its major repaving project for Prince Rupert this Spring, with Peter's Brothers Construction of the Southern Okanagan awarded the 3.94 million dollar contract for the project that will see the main thoroughfare through the City resurfaced from the Civic Centre all the way to the BC Ferry Terminal at Fairview Bay.

4.3 kilometres of roadway will be paved starting in April with the schedule calling for the project to be completed by July. With Transportation Minister Todd Stone observing to the priority that the province put towards this project.

“I had the opportunity to visit Prince Rupert last October and announce our commitment to this project with Mayor Brain,”  ...“These roads serve as Prince Rupert’s main thoroughfare, so it was important for the ministry and the city to make these improvements a priority.”

The information release related to today's contract award (read here) also noted that the City will be partnering with the Province to resurface 3rd Avenue West at a cost to the city of approximately 500,000 dollars.

Mayor Brain picked up that theme of the announcement today, taking to his Facebook portal with a bit of recycling for the readership out there. With the Mayor recounting once again how the City will piggy back on that contractor to also repave all of Third Avenue through the downtown core. 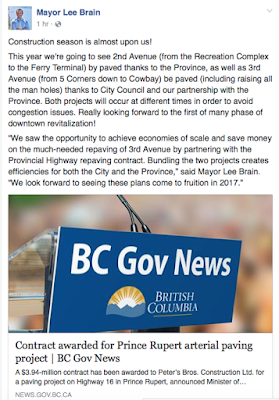 Those travelling through the downtown area recently have noted that City Crews have been doing a bit of preparation for that work as they tend to some of the local needs before the contractor arrives later this Spring.

You can review the original announcement by the Transportation Minister from October of 2016 here.

Back in December, Prince Rupert City Council through a review of Capital Projects for 2017, first indicated its desire to tie into that project and pave Third Avenue following the completion of the major work on McBride, Second Avenue West and Park Avenue.

More notes related to the roads and highways of Northwest BC can be found on our Highway 16 Corridor page here.

Items related to the work of Prince Rupert City Council can be reviewed on our Council Discussions page.
Posted by . at 1:19 PM