The problem with Public Comment period is ... sometimes there are public comments!

The quest for public engagement with its citizens went a little sideways on Monday night for Prince Rupert City Council, as one presentation during the course of the Committee of the Whole portion of the night clearly raised the ire of Mayor Lee Brain.

The public comment portion got off to a rough start when Larry Golden, who is a frequent contributor to the public forum portion of Council sessions, offered up an observation that he believed that City Council is mis-using the Closed Meeting process that takes place before regular public council sessions.

With that marking the starting point for what would become some tense words in council chamber, Mr. Golden then turned his attention towards three questions that he had for City council members, asking for an update on issues related to Watson Island and expenses related to that industrial site and whether there is any kind of a status update from the work there.

He also added a number of questions related to Legacy Inc. which is controlled by the City of Prince Rupert, most of those inquiries were directed towards Legacy's involvement with the Watson Island situation, as well as the status of the proposed LNG development for Lot 444.

A third question was seeking further background on the city's regulations on restricted dog breeds found in the community.

When it came time for the civic reply to the two questions of Watson Island and Legacy, the Mayor briefly consulted with staff and then advised Mr. Golden that Council would review the information and get back to him, though Mr. Brain did not provide any kind of timeline as to when that update would be provided.

Mr. Golden then inquired as to his request on Lot 444 and was again advised that it would be addressed through the city's response as outlined previously.

Of the third question, Council never did offer up an explanation on the dog issue.

Mr. Golden then followed up on his theme of council mis-using the nature of the Closed Meeting process, and it was when he used the term illegal that the Mayor addressed the issue sternly, taking Mr. Golden to task for the way he worded his question, noting that he was stating opinion and not fact.

By reviewing the exchange, it is clear that Mr. Golden did make a mis-step in his commentary and should probably have used a different approach and different language while trying to learn more about how the City conducts its Closed meeting process.

Though his theme is one that probably resonates with those in the community who may follow Council and make note of the frequency of those closed meetings over the last two years of this Council's life.

Asking questions as to why council relies on the closed meeting approach and other out of public view options so often is an honest question and one that should be answered in a respectful manner, by throwing the word illegal into the mix Mr. Golden unfortunately provided an opportunity for the Mayor to end the discussion.

More importantly from the exchange on the night though is the lack of information on the two very legitimate questions that were asked about Watson Island and the way that Legacy Incorporated is being used by the City.

They make for two topics that the Mayor and Council rarely seem to discuss in public session, marking a trend that seems to be moving away from discussing controversial topics in public council session.

Mayor Brain never really made clear why he couldn't at least offer up some general observations for Mr. Golden on the two questions, instead he and Council for the most part punted the topic down the road, noting that the city would address his questions at some other time in the future.

Considering the importance of the questions asked, that response shouldn't be considered satisfactory by residents of the city, who are as deserving of an update on the issue as Mr. Golden is, a delivery of information that should be provided in the public forum of a City Council session.

As the conversation between the Mayor and Mr. Golden became more heated, and the Mayor chastised Mr. Golden for his approach during the session, Mr. Golden simply got up and walked away from the microphone.

The next participant in the Committee of the Whole opportunity provided for a commentary that didn't attract quite the same strong reaction from the Mayor, though Mr. Brain did manage to work his exchange of words with Mr. Golden into that conversation as well.

The incident would linger with the Mayor through the council meeting, with Mr. Brain returning to the topic as part of the close of the Council meeting where he again expanded on his observations on how presentations to council should proceed.

While expanding on the theme, Mr. Brain would conclude his thoughts by commenting that he considers the type of accusation from earlier in the evening an attack on staff and on council, which is working very hard.

He further added that it was something that he would not tolerate and how he hoped that in the future people won't come forward with that type of demeanour again.

For a full overview of Monday's City Council Session and the back and forth of the Committee of the Whole session can be reviewed from our City Council Timeline.

During the course of his 2014 campaign to become Mayor, Mr. Brain made frequent comments related towards the need for better Communication and Transparency, as well as to outline plans to host town hall meetings should he become Mayor, the latter something that hasn't been acted on since the Council was sworn in. 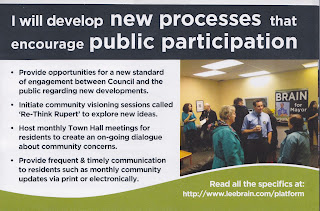 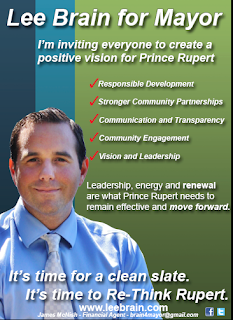 Considering how quickly things can apparently get to a flash point for the Mayor, it's probably a good thing that he hasn't moved forward on those monthly town hall plans.

Though the ability and opportunity for the public to ask questions of their council is something that the City should encourage, though with attention as to the proper etiquette that should be followed, as Mr. Brain noted.

Still, any time that you invite the public to ask questions of their elected officials, there may be one or  more tough questions brought up and they should be answered

And unlike Monday, those answers should not be deferred to some other time outside of the public session from which they were raised

The other takeaway from the somewhat heated exchange of earlier in the evening was that not one other Council member chose to speak to whether Mr. Golden had legitimate questions that should be answered, nor to express how they saw the Mayor's handling of the situation in the council session.

Council members may want to go back to the tape as they say, to review how they dealt with the legitimate questions of a resident of the city and perhaps if the tone taken by the Mayor might in the end drive residents away from civic participation in council activities.

The two key areas of note for the night are in the first seven minutes of the Council session and the final three, where the Mayor once again delivers his commentary on what he believes is proper behaviour when approaching City Council.

More background on City Council developments can be found from our Council Discussions archive page.

For those looking for a bit of background on Watson Island and the City's Legacy Corporation we have archive pages listed below which have been following developments from both over the last few years.

Legacy Corporation
Posted by . at 1:15 PM

Email ThisBlogThis!Share to TwitterShare to FacebookShare to Pinterest
Labels: Sparks over words at Committee of the Whole february 20