The city's residents received their first glimpse into the financial blue print for the year ahead, as Corinne Bomben, the City's Financial Officer delivered the annual Budget Presentation to City Council, a twenty minute review which included a slide show to offer up some of the key elements that the city's Finance Department wanted to highlight.

It was the fourth financial forecast that Ms. Bomben has delivered for Council since taking over the CFO's duties back in May of 2013 and Monday provided for some familiar themes on the challenges that the City faces and notes of interest that the CFO has raised in years past.

Among the ongoing service and revenue challenges that Ms. Bomben highlighted for council and those watching at home were areas of note as to how the city shoulders a large share of the burden when it comes to services for the region. 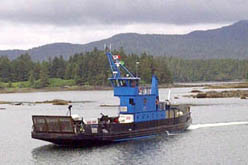 Ms. Bomben noted that the Digby Island Ferry will require a one million dollar subsidy for 2017, observing how an independent report on the capacity of the ferry service has identified the airport as one of the most challenging tax sets in the industrial world.

The Transportation system was described as making Prince Rupert one of the few municipalities in BC required to subsidize the transportation to the airport, while other communities have either road or light rail and are user pay systems.

She noted that while city residents pay both user fees and a tax subsidy, those in neighbouring communities and visitors benefit from the proximity of the airport, they contribute to it by way of only a pay user basis.

Another frequent topic was explored on Monday, with the ever challenging Provincial Cap Tax issue once again reviewed for Council, highlighting the challenges that the industrial lands that fall under this, providing less taxation for the city. 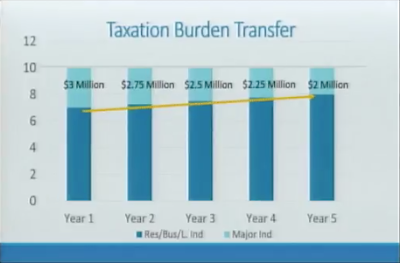 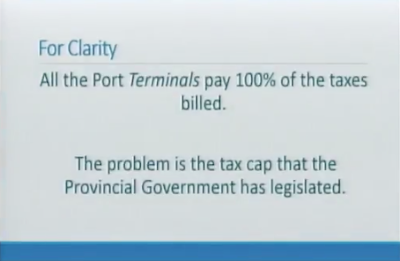 The issue is one which puts the City in a position to have to rely on the other sources of taxation of light commercial, commercial and residential. This taxation Burden Transfer is one that Council continues to have to balance as they prepare their financial plans each year.

This topic provided for a range of questions from Council members who inquired as to the options available to the city to try to address the impact on the city's financial plans.

The theme of the impact on Capital works, purchases and projects was also outlined Monday, with Ms. Bomben outlining the major projects ahead for 2017. Those capital projects include:

When it comes to the city's ongoing planning for Major Projects, the city is partially through their timeline of preparation, with continued funding to be provided by the city's Legacy Corporation to provide the same level of funding with no impact to be delivered to taxpayers.

When it comes to Budget requirements for 2017, Ms. Bomben observed that the city has not proposed any expansion to services for the year ahead.

She did however offer up a breakdown on some of the factors that have resulted in a deficit of 160,000 dollars.

Those areas include, Contractual wage increases, funding for increased Library need and the need for an adjustment related  to the reduction of flight operations at Prince Rupert Airport with the departure of Hawkair. 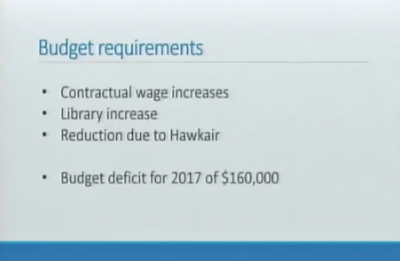 To address that deficit situation, Ms. Bomben advised that the Finance Department was recommending an increase of 1.5 percent to the mill rate on taxation to be used in bringing the city's budget into balance. 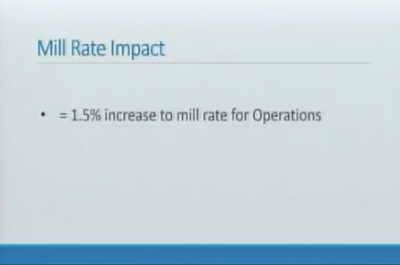 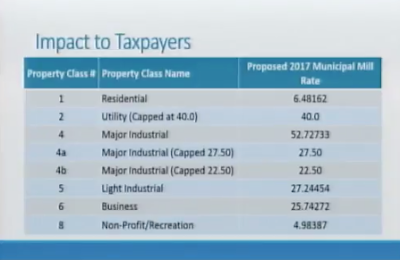 To provide some background on what kind of impact an increase to the mill rate may have on local taxpayers, the CFO then provided a tutorial of sorts on how residents could determine the relation between their home assessments from January and the proposed increase to the mil rate.

For an average home valued in the 260,000 dollar range, the proposed increase in the mill rate would translate into an additional 38 dollars on this years tax bill, Ms. Bomben outlined the formula that residents with different assessed values could use to determine what impact the increase to the mill rate may on individual owners.

Both Ms. Bomben and Mayor Brain were quick to also note that it does not mean that a blanket increase of 1.5 percent might be ahead if the Budget is approved, with both noting that for some residents of the city their tax bill may actually be reduced.

The CFO also highlighted some options for taxpayers who may qualify to investigate to seek some relief on their taxes. 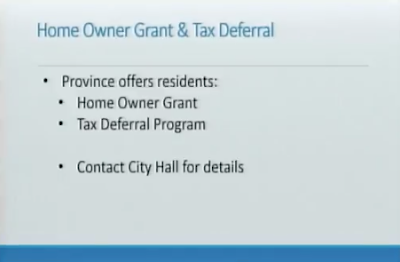 To bring the presentation to a close, Ms. Bomben reviewed the timeline ahead for public consultation on the Budget process. With an opportunity for residents to participate in selected questions by way of electronic voting at both the March 15th and 20th Sessions to be held at City Hall. 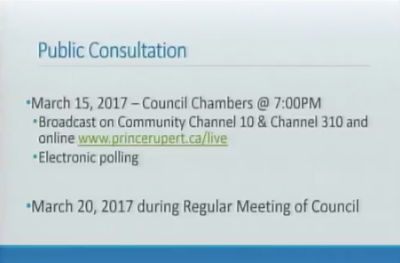 Following her Budget presentation, Councillor Randhawa asked to whether the city has any data on the number of people that may see an increase in their taxes for 2017, he was advised that the city can access that information but has not to this point created a report on the topic, while Councillor Niesh offered up a reminder on the details related to the Home owners grant.

Councillor Mirau inquired if there was any impact last year when it comes from the appeal process of assessments, he was advised that there was little impact to the budget forecast from last year following those appeals.

Mr. Mirau then followed up to seek some clarification on the nature of the Ridley Island Tax Sharing agreement between Prince Rupert and Port Edward and what progress the city was finding with the province in beginning negotiations with the District of Port Edward.

You can review the slide show presentation from the City website here.

Included in her written report to Council, but not discussed to much length in the public session were a few of the other impacts on the city's financial planning including:

All Capital purchases and works are to be funded through grants, reserves, dividends, and operating surplus carried forward from 2016.

The impact of the departure of Hawkair on the city is a reduction in airport revenue of $120,000.

The Prince Rupert Library has passed on a budget increase, that will require an additional 29,000 dollars in funding from previous levels.

Prince Rupert Legacy Inc. will be providing a dividend of 1.3 million to fund Planning for Major Projects initiatives.

In addition to the funding for the Major projects planning, Legacy will also be providing funding for 4.789 million in Capital Works, with 4.050 million of that amount earmarked for Phases one and two of the Water project.

Also provided in the written report were the expense and revenue statements that were made available for review from the Council Agenda on Monday night ( see page nine of the Agenda for March 6th).

Among the key items that stand out from those financial notes include expenses on the delivery of such civic elements as Fire and Police services, as well as other areas of civic services.

Also included in the financial statements is a snapshot of the impact of the ongoing work at Watson Island and the contributions of the Legacy Fund to the city's financial situation:

Fiscal Expenditures was a category that was not explained as part of the Budget presentation, but the expenditures for 2017 in the segment of civic spending will be on the increase in the year ahead.

On the Fiscal Revenues side of the spreadsheets, the City indicates that it is forecasting $6,804,000 for the year ahead, which is down from the actual receipts of 2016 which were noted at $10,720,643

That compares to what was spent at Watson Island in 2016, with the unaudited Actual results indicating expenditures of $1,656,348, with no revenues indicated as received listed for 2016.

In 2016, the City had projected significantly less in the way of expected expenditures which were listed at $500,000 as part of the forecast for last year.

As the City noted in their media release of last week, decommissioning expenses related to Watson Island were covered off by funding from the Legacy Corporation.

"Additional costs of the decommissioning were borne by Prince Rupert Legacy Inc., a 100% wholly owned subsidiary of the City of Prince Rupert, so as not to burden taxpayers."

From it's financial statements, the City seems cautiously optimistic that 2017 might be a better year ahead on the revenue streams from Watson Island, with a forecast of $400,000 in revenues anticipated, though it should be noted that they had offered up a forecast of $500,000 dollars in revenue for 2016 and as was noted in the statement  none were delivered.

You can compare the full departmental list of expenditures and revenues from the two financial statements below:
(click to expand) 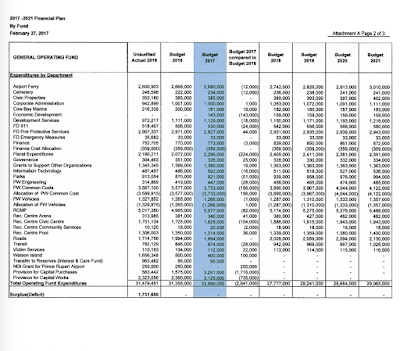 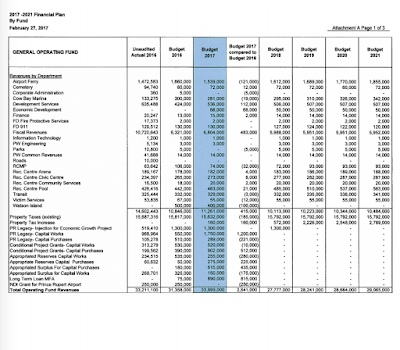 Ms. Bomben's Budget presentation is available on the City's Video Archive page, it begins at the very start of the Council session and continues through over the course of the following twenty minutes.


The CFO's review for Council is well worth watching in order to gain an understanding on the overall financial direction that the City has planned for the year ahead.

Though those that may be giving some thought to providing for a contribution to the City's consultation sessions will want to review her written report and the accompanying charts that came with it.

Using both the presentation to Council and the report delivered to Council, provides for some good background on the process and perhaps will provide for a few talking points to offer up as important questions for the Council members to consider prior to the adoption of the budget.

You can get an expanded look at the Budget Presentation from our Council Timeline feature here, more notes on the Budget process can also be reviewed from our Budget Archive page.