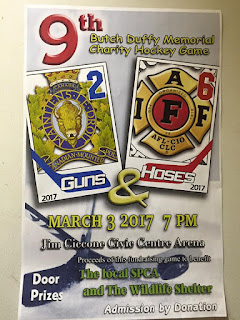 The Prince Rupert Rampage may be heading to the off season, but there is still some hard hitting hockey to take place at the Jim this Friday night, as the city's Fire and Police squads face off in the annual Guns and Hoses showdown.

This year's showcase marks the ninth time that the two rivals have taken to the ice as part of the Butch Duffy Memorial Charity Hockey Game, which not only showcases the hockey talents of the two emergency services, but makes for a fun evening for all that take in the game.

Friday's event makes for another quest for bragging rights that features members of both the RCMP and Prince Rupert Fire Rescue, along with a few ringers coming over the boards from time to time.

As they note on their Facebook page, the Firefighters have had the better of their partners in Red Serge for a few years now, with the Hoses squad holding out their hopes of keeping the mark on the winning side of the ledger for one more year.,

And while the two teams always put on a competitive game, it's all about giving back to the community and the big winner from hockey night have been the local organizations that have benefited from the on ice efforts and fundraising in the stands from previous years.

This year the Prince Rupert SPCA and the Wildlife Shelter will be the ones to receive proceeds from the night of hockey at the Jim Ciccone Civic Centre.

Puck drop is set for  7PM on Friday night with admission by donation.

In addition to the fast paced action on the ice, those in attendance also will be in the running for a range of door prizes through the night.

For more notes on Community events see our archive page here.
Posted by . at 8:34 AM