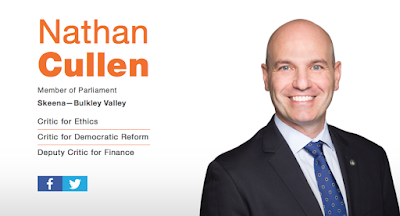 The NDP has shifted around some of the critics roles on Parliament Hill as we head towards Spring, with Skeena-Bulkley Valley MP Nathan Cullen adding on the role of Deputy Critic for Finance to the growing list of areas of overview in Ottawa.

Outgoing NDP leader Tom Mulcair made the announcement public last month, part of a list of new duties to be taken on by the NDP MP's.

Form Mr. Cullen, the newest position adds to a workload that includes shadow critic on ethics and Critic for Democratic reform, two themes that made for much of his work in Parliament over the last nine months during the now abandoned process of seeking electoral reform.

Keeping the theme of electoral reform alive however is a goal that Mr. Cullen continues to pursue, making note on his Facebook page yesterday that his petition to insist that the Prime Minister keep his promise on electoral reform had received almost 130,000 signatures to this point. 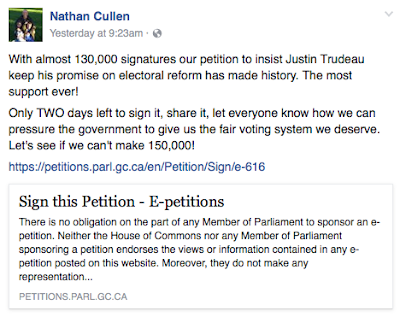 The MP for Skeena-Bulkley Valley takes on his new duties as the NDP enters a rather low key to this point leadership race.

So far in the NDP process only three contenders; Charlie Angus, Guy Caron and Peter Julian having registered their candidacy with Elections Canada to this point.

It makes for a short and for some untested list of candidates, one which has caught the attention of constituents in the Northwest.

Many of Mr. Cullen's most devoted followers have continued to log onto his various social media streams, urging the MP to revisit his decision to sit out the leadership campaign.

You can find more items of interest on his work in Ottawa from our House of Commons Archive page, while a more expansive look at politics in Canada can be reviewed from our political portal D'Arcy McGee.