During the course of last month's School District 52 Board meeting, it was noted that the District would be forwarding a letter to the Minister of Education, making known to Minister Mike Bernier the growing concern in the community over delays in the replacement of Prince Rupert Middle School.

The letter which was written by School District Chair Tina Last on February 21st recalls for the Minister some of the work done at the School District level to meet the Ministry's requirements for the project, including the closure of three elementary schools between 2008 and 2001 and the reconfiguration of the remaining schools to improve capacity.

The history of their efforts towards Prince Rupert Middle School is also outlined, noting that the school had been listed on the seismic list and moving towards replacement until it was removed from that list in 2011, a decision that the Board continued to appeal.

Citing a Project Identification Report issued by Stantec in May 2016,  Ms. Last reinforces the need for replacement of the building noting such urgent items of note as an overdue roof replacement and aging and inefficient boilers.

Among the list of other concerns that the SD52 Chair raises for the Minister is the issue of lead in the school water system, ongoing power outage issues and failing water and sewer pipes, as well as flooding issues in the basement and crawl spaces of the building.

Ms. Last notes that Air quality issues related to the wood shop continue to plague the facility as well, and while testing in an adjoining crawl space has noted that the smell is not dangerous, the presence of mod and hydrocarbon levels has resulted in restrictions to the crawl space. The Board Chair notes that the prospect of having to close the wood shop is a distinct possibility as early as this September.

As the letter comes to a close, Ms. Last observers as to the challenges that School District officials face in trying to keep parents and concerned community residents informed as to the timeline for the much needed replacement.

You can review the full text of the letter to Minister Bernier below, it has also been posted to the School District 52 website :
(Click to expand) 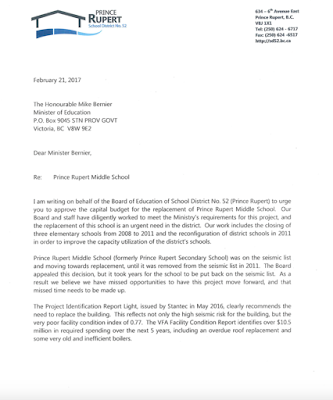 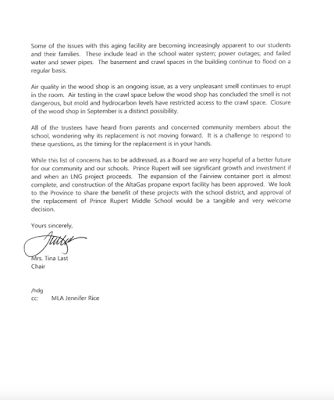 North Coast MLA Jennifer Rice has raised the issue of Prince Rupert Middle School a number of times in the Legislature in recent weeks, most recently on March 2nd with the MLA making use of the School District's letter to reinforce her call for a replacement building.

With an election campaign looming in the region, Liberal candidate Herb Pond has also made passing mention of the need for a new school, though a scan of his campaign themes on his social media stream note that he hasn't tackled the topic in any depth since his comments of early January.

You can review some of the background on the need for a replacement for PRMS below.

More items of interest from SD52 can be found on our archive page.
Posted by . at 9:24 AM

Email ThisBlogThis!Share to TwitterShare to FacebookShare to Pinterest
Labels: SD52 letter to Minister Bernier on PRMS