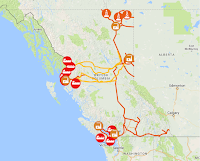 The July cancellation of the Pacific NorthWest LNG terminal near Lelu Island may not be the end of the LNG story for British Columbia just yet, as some of the other energy partners that Petronas had lined up for the massive industrial development still seem hopeful of developing a terminal somewhere in order to ship gas assets from Northeastern British Columbia.

A few items out of the Southeast Asian media are suggesting that Indian Oil Corporation officials have quietly begun the early work in looking for a new site to build an LNG shipment terminal, though the target destination for their interest was not explored to any great detail.

In a number of articles over the last few days, Sanjiv Singh, the Chairman of the New Dehli based Indian Oil Company outlined that the company was still optimistic on its investments up stream in the Canadian gas fields and that it was in talks with its partners to begin to scout for an alternative, cheaper site for the PNW LNG terminal, following the pullout of the lead developer.

Indian Oil had purchased a 10 percent interest in the now cancelled Petronas project back in March of 2014. Other partners in the former Petronas alliance included the Chinese Oil firm Sinopec, Japan's Japex and Petroleum Brunei.

One sector no doubt taking interest in any renewed development plans is the British Columbia Building Trades Association and the provinces' Independent Contractors, officials from their groups recently recounted the hundreds of lost job opportunities that went with the July cancellation of PNW LNG.

The quiet launch of exploration for a potential LNG terminal site will make for an interesting political story to watch as the new NDP government gains its footing, putting the spotlight on how the new NDP/Green alliance in the Legislature will approach such interest and whether foreign investors will find support for their plans for development in the province.

In an opinion piece for an industry newsletter Oil Voice, Easwaran Kanson, confirms the new interest from the other members of the partnership that made up PNWLNG and while confusing the governing Liberals of the day with the then opposition NDP, he still traces some of the background to the Petronas decision of late July.

Of note from his observations, could be a glimpse as to how the overseas energy industry will review many of the financial and industry factors that led to the PNW LNG cancellation, as well as focusing on the political climate that LNG developers now face in the province.

It might have been different, but Pacific Northwest also came under much pressure of local politics. Located in an environmentally sensitive area of British Columbia, environmentalists have railed against the project from the start, even as the Canadian federal government and the BC state government gave their approvals after extensive environment impact studies. Then in May, the ruling NDP lost their majority in BC state elections, forcing them to form a support coalition with the Green Party, vehemently opposed to the project. When that happened, the writing was always on the wall for PNW.

Following the Pacific NorthWest LNG cancellation, members of the new government were quick to suggest they were still interested in LNG development in the province, though their partners in the Greens were still expressing their full opposition to that prospect.

How the NDP responds to any international interest in moving forward with LNG plans for BC, may have to be balanced with how Mr. Horgan and his ministers approach Mr. Weaver and his party,  a small but vocal collective who also hold the fate of the government in their votes in the Legislature

More items related to the Indian oil company interest as well as further background on the demise of the PNW LNG project can be found on our archive page here.
Posted by . at 9:01 AM