As we cross mid-March, still no updates on status of much anticipated modular homes promised for delivery this month


When the tents came down around Prince Rupert City Hall last November, one of the key elements announced as part of the outreach to the homeless in the community, was the prospect of the delivery of 44 affordable housing units in the community by the month of March.

And while the tents are gone and a welcome warming centre in place for much of the winter (an option soon to run out on its time limit on March 31st), there has been little more to be heard in the way of updates from any of the stakeholders when it comes to when those housing units are going to arrive and where they will be going.

Last fall, there was much talk of site selection tours and the need to set the groundwork for the arrival of the modular homes, with MLA Rice speaking to Council in November and noting that the housing units should be up and in operation by the Spring.

"I'm happy to announce tonight that Prince Rupert will receive 44 units of modular housing for the homeless in our community ...  along with these units will come funding to provide support services, meant to raise individuals out of poverty and homelessness. Your BC government is providing the modular units, the city is providing the land and North Coast Transition Society will be operating the wrap around services that are muchly needed " -- North Coast MLA Jennifer Rice, announcing the plan to deliver affordable housing in Prince Rupert at the November 14th City Council Session

In response to a question that night from City Councillor Gurvinder Randhawa , Ms. Rice noted at that time that "the hope is to have the units in Prince Rupert as soon as possible up and running by March"

For his part, as the MLA was rolling out her housing announcement in November, Prince Rupert Mayor Lee Brain made note of the partnership that the city was embarking on with BC Housing and North Coast Transition Society as they looked towards addressing the housing initiative, outlining how the city was working to find a suitable location for the units. 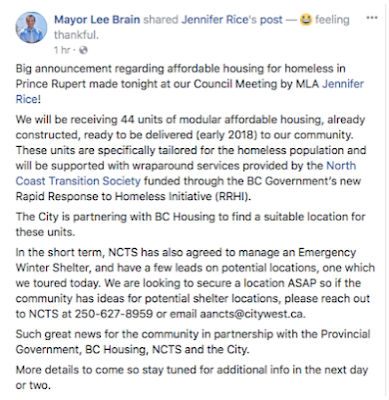 A chance to go back to the good news of November, can be found from the presentation on the housing issues availble from the City's Video archive for the November 14th meeting, Ms. Rice delivers  her news and commentary starting at the beginning of that night's council session.

However while the fall announcement caught a lot of attention and was welcomed by many, since November, there has been little comment from MLA Rice, or Mayor Brain and Council as to how that housing program is moving along.

And more importantly, there has yet to be any indication as to where in the community City Council has decided will be the best location for such a development and when those selected to take up residence will be allowed to move in.

The North Coast Transition House Society has been tasked to take on a more expanded role when it comes to social services and housing need in the community, and continue to work on the challenges related to how they will deliver those services to the region.

So far though, when it comes to the prospect of those 44 modular home units, they too have not had much in the way of updates on the housing plans.

The tent city protest of the fall certainly attracted the attention of politicians in the region, as this review we outline below indicates.

The problem is that for all that early attention, once the immediate issue of a winter place for the most at risk of the homeless in the community was tucked away in the emergency shelter on Third Avenue West, the topic has all but vanished from the news cycle and has had even less exposure at City Hall, where not one item on affordable housing has been discussed since December.

Likewise, while North Coast MLA Jennifer Rice has spoken to the work that the NDP government has done on affordable housing issues across the province, she has not to date offered up a timeline for when her own constituents may be able to move into the 44 units which were promised in November.

As we outlined on the blog yesterday, the North Coast Transition House Society will be holding a homeless count  in Prince Rupert on March 21st, the 24 hour project designed to give the province an idea as to how many in the community are in a homeless situation, or in danger of entering one.

Now if only there could be somewhere in town for the homeless to go to call home, in order to avoid the need for a homeless count in the first place.

The calendar still features fifteen days to go for March, and while it seems unlikely that the units will be in place anywhere in town by that point, hopefully some kind of update will be on the way to provide some sense of progress on an issue that has been too long neglected in the community.

More notes related to housing in the Northwest see our archive page here.


To return to the most recent blog posting of the day, click here.
Posted by . at 10:50 AM