As we head into March and with the prospect of the final exams of April for NWCC students on the way, it would appear that there may be a very good chance that the Class of 2018 will be graduating with diplomas and certificates that still say Northwest Community College.

The process of changing the name of the college serving communities from the Bulkley Valley to Haida Gwaii from Northwest Community College to Coast Mountain College seems to have hit a slight delay, with the Province still to sign off on the name change request from the Terrace based post secondary institution.

In response to an inquiry from the North Coast Review, Sarah Zimmerman, Director of Communications and Public Relations for NWCC noted how the College "appreciates the time the Ministry is taking to contemplate the request to change the name of Coast Mountain College" ... as well as to how they are "encouraged that the Provincial Government is taking the work seriously and that it will help in a smooth transition to a new name."

During the course of their consultation period on the proposed name change over the last year, the college made note of a range of issues that they were hoping to address areas such as concerns over levels of student enrolment, and ways to raise the visibility of the college on-line for those seeking out their educational opportunities.

Those are some elements from their strategic planning, that the college has identified as themes where a change to the new name could prove beneficial to increasing enrolment and raising the college's profile.

The NWCC Board of Governors approved of the name change to Coast Mountain College in February of 2017, the new name considered important towards the re-branding of the college's direction, which is embracing a theme of experiential place-based learning.

Towards those goals the college has introduced a number of new initiatives including partnerships with educational institutions across BC around the world and an increase on their field school programs at the various campus locations in the Northwest.

As part of their approach to the Provincial Government on the request for the change in name, NWCC has submitted a range of material and letters of support in support of their strategic plan.

Though to this point, there does not appear to be any timetable in mind as to when the Ministry/Province may provide for its final word on the request.

Last week, the provincial government celebrated BC Colleges Day, an event which was observed by North Coast MLA Jennifer Rice, an alumnus of Northwest Community College herself.

As part of her salute to the day, Ms. Rice highlighted one students journey through the post-secondary education opportunities available in the north. 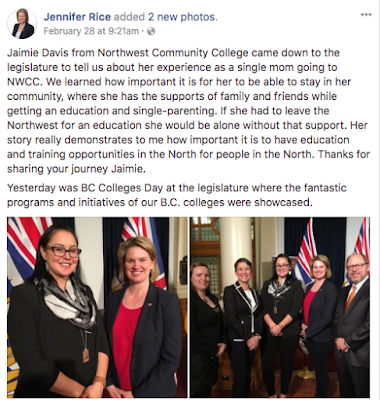 One might imagine, that the Administration, staff and students of NWCC, as well as the residents of the Northwest will be hoping that there is some form of decision to come shortly when it comes to the name change request and that it perhaps will be delivered well before the Legislature celebrates Colleges Day 2019.

There hasn't been much heard on the name change theme since the start of the year, to provide for a review of the plan so far, some of our past items of note on the Name change process from 2017 can be found below:


To return to the most recent blog posting of the day, click here.
Posted by . at 9:19 AM