The two representatives that serve constituents in Northwestern British Columbia were both on the same topic on Monday, as they exchanged comments and observations related to fishery issues in the province.

The discussion came on the first morning of the new session of the Legislature in Victoria, as both MLA's explored a number of themes when it comes to the sustainable future for salmon, one of the key issues for both riding's in the region.

The Skeena MLA opened the review on the state of the fishery, exploring the early fishery outlook from the Department of Fisheries and Oceans and the concerns that have been raised from those early indicators and calling on his past experience as a Chief Councillor with the Haida Nation to note the impact fishery decisions could have communities. 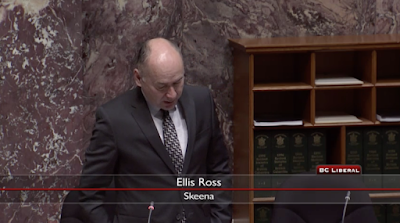 Recently the Department of Fisheries and Oceans released their outlook for 2018. The outlook measures 91 different groupings of salmon. Twenty-eight are expected to be at or above the amount necessary for a healthy population, and 30 are expected to be near or below expectations.

Then there are some populations of grave concern. The projected returns for sockeye and chinook to the Skeena watershed are so low that DFO is considering a total closure for all user groups. This includes commercial fisheries, the recreational sector and First Nations.

This situation could have a significant impact on communities up and down the coast. Unfortunately, when salmon returns fall well below projections, we have a tendency to point fingers and lay blame on the doorstep of one sector or the other.

This does little to help the salmon and only fosters the tensions between people. As chief councillor of the Haisla Nation, I tried to look into improving the stock returns in my territory, only to find out the problem of salmon returns goes way beyond what is just in my region.

The situation is further complicated by the fact that we share the resource with our American neighbours. This includes the state of Alaska, to the north, and coastal states south of us, including Washington, Oregon and California.

For her contribution, North Coast MLA Jennifer Rice called on issues of sustainability  and the ripple effects that are felt in communities that are fishery dependent. 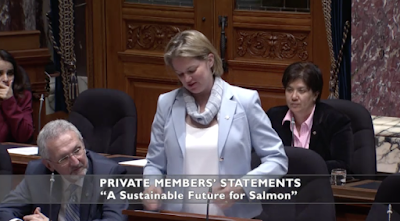 The sustainability of our coastal industries is extremely close to not only my heart, but clearly his heart as well. It's a vital part of our history, our economy and, certainly, the culture of the north coast. In fact, commercial fishing is a strong thread in the social fabric that has held B.C. communities together for generations.

But the industry's impact is typically evaluated in only dollars and cents, leaving the wider societal impacts poorly documented and largely underrepresented in fisheries policy and in marine planning. Yet these values are no less important to the people who make their livings on the sea or who live in coastal British Columbia.

There's more to fishing than profit margins. There are economic ripple effects as fishermen spend their money on equipment and supplies. Fishing revenues spread throughout the local businesses and local communities. It also has a role in the gifting and trading of seafood, and commercial fishing vessels play a key role in this complex system. One fisherman may give or trade seafood to over 100 other people. This food community also contributes to food security in rural and remote communities where we live.

This is why our government, along with the federal government and industry, is currently planning for habitat restoration, habitat protection and wild salmon health. The Minister of Agriculture is representing the interests of our province on the Pacific Salmon Commission, negotiating with the United States in order to address things like bycatch and overfishing, in order to maintain these industries and keep fishing sustainable.

These days many fishermen are First Nations. Without the ability to commercially fish, they would not have the necessary vessels to exercise their food, social and ceremonial fishing rights, nor have the ability to feed their elders and others in the community.

Being a commercial fisherman is more than just a job. It's a lifestyle that connects people to each other, to their communities and to the surrounding environment, which is why we are working on a consent-based process, working with First Nations in order to ensure sustainability in regards to the ten-year renewal process of fish farms.

Ms Rice also returned to what has become a familiar theme on the North Coast over the last year, that of the inequity between fishing policy in Atlantic Canada and that which is found on the B.C. coast, with the MLA once again expressing a desire to see adjacency policies be introduced by the Federal government for the BC industry.

We need similar policies of adjacency in British Columbia. In B.C., a single processor controls multiple fisheries, from production through to export. Independent fishermen become price-takers, and the social and cultural fabric of our coastal communities is eroded. The economic viability of the next generation of fishermen and our coastal communities depends on improving these policies.

MLA Ross was aslo focused on the fate of the steelhead for his contribution to the conversation on Monday, making note of the need for all groups to work together to assist in bringing back the steelhead stocks.

Thank you for the response from the hon. member. One of the biggest concerns of 2018 is the survival of the steelhead salmon. There has been quite a debate as to whether steelhead are in fact salmon or more closely related to trout. Steelhead are anadromous and migrate to the ocean, where they face the same pressures as other species of salmon, and just like Pacific salmon, steelhead return to the rivers, where they spawn. But unlike salmon, they don't necessarily die after spawning, and they sometimes return back to the ocean.

To ensure their future survival, we must ensure that governments at all levels work in concert with First Nations, recreational anglers and commercial fisheries to help the steelhead rebound. There are some factors, such as ocean warming, that we cannot readily address, but there are other factors, such as commercial harvesting methods and habitat restoration, that we can control. We as members of this Legislature all have a responsibility for the future survival of steelhead. If we lose this battle, our chances of improving conditions for other threatened species of salmon will not be successful either.

You can review the full range of the discussion points from Monday through the Legislature Archive page here. The statements on the fishery issues start at around the 10:15 AM point of the proceedings.

The Video review of their commentary is also available through the Legislature 's Chamber Video Archive form Monday morning, starting at the 10:15 AM mark.

For more items related to the work of both MLA's at the Legislature see our links below:

To return to the most recent blog posting of the day, click here.
Posted by . at 9:06 AM

Email ThisBlogThis!Share to TwitterShare to FacebookShare to Pinterest
Labels: Fishery issues from the Legislature for April 9 2018