As they look to move forward with their plans for development of a Liquid Propane Export Terminal on Watson Island, Alberta based Pembina is taking up some prime real estate in downtown Prince Rupert.

Prince Rupert's latest in project proponents has taken over the offices that once hosted the Pacific NorthWest LNG project, with Pembina putting their stamp on the Capital Mall building with some front window signage over the last week.

The new office provides the company with a storefront presence in the downtown area, one within but a few steps from their landlord at Watson Island in the City of Prince Rupert.

As for the proposed LPG terminal, there has not been much in the way of new information related to the project to be found on the Pembina website, with the Mayor Projects section  hosting the early details of the Watson Island terminal development. 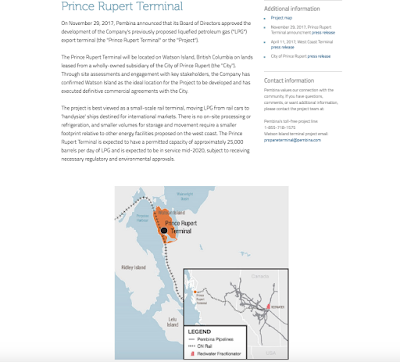 The Prince Rupert plans also made for a segment of 2017 Annual Report for the Alberta energy company, with the timeline for the 250 million dollar project still pointing towards the terminal going into service in the middle of the year 2020.

On November 29, 2017, Pembina announced approval for the development of its proposed liquefied petroleum gas export terminal in Prince Rupert, B.C. The Prince Rupert Terminal is expected to have a permitted capacity of approximately 25,000 barrels per day of LPG with the LPG supply primarily being sourced from Pembina’s Redwater fractionation complex.

The Company continues to progress stakeholder consultation and detailed engineering work to support facility design and various permit applications expected to be submitted throughout 2018. The expected capital cost is approximately $250 million and the project is anticipated to be in service mid-2020, subject to regulatory and environmental approvals.

The pace of the project and what's ahead could make for part of the Hays 2.0 Plan Information update planned by Mayor Lee Brain for April 25th at the Lester Centre.

You can find more about the early days of the Pembina plans from our archive page here.


To return to the most recent blog posting of the day, click here.
Posted by . at 9:26 AM