Reduced Fares, return of Seniors Discount in place at BC Ferries


While April 1st brought in a range of tax increases for residents of British Columbia, there was one area where there was no Fooling around on the 1st, with BC Ferries rolling out its new schedule of Fares for twenty-one inter island and northern routes of the Ferry system in the Province.

With agreements in place between the Provincial Government and BC Ferries through until the 2020 Fiscal year, with the average reduction on fares pegged at fifteen percent.

The BC Ferries Seniors' Discount is back as well,  with discount levels between 50 to 100 percent for travel Monday through Thursday, excluding holiday Monday's,  on major and inter island routes.

On Tuesday, Mark Collins, BC Ferries’ President and CEO outlined how the province's funding formula has been put to use by the Ferry Service.

“We are focused on the affordability of ferry travel. Our present financial position allows us to use some of our net earnings to reduce fares for our customers.” ... “This major additional contribution by the Province expands efforts to improve affordability.”

The revised Fare schedules for the Prince Rupert and Haida Gwaii can be reviewed below:
(click to enlarge) 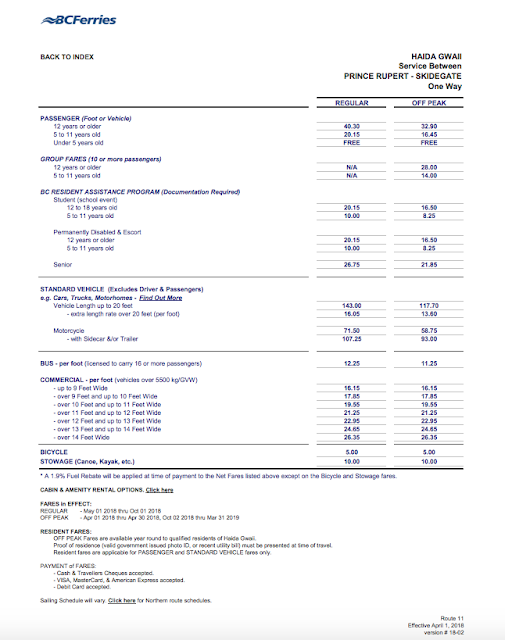 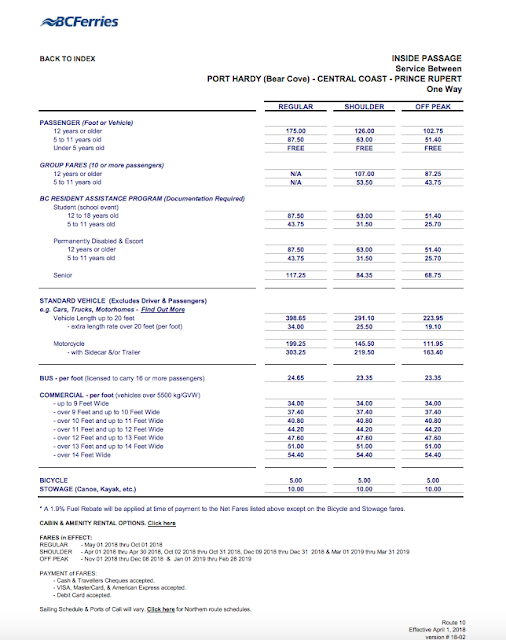 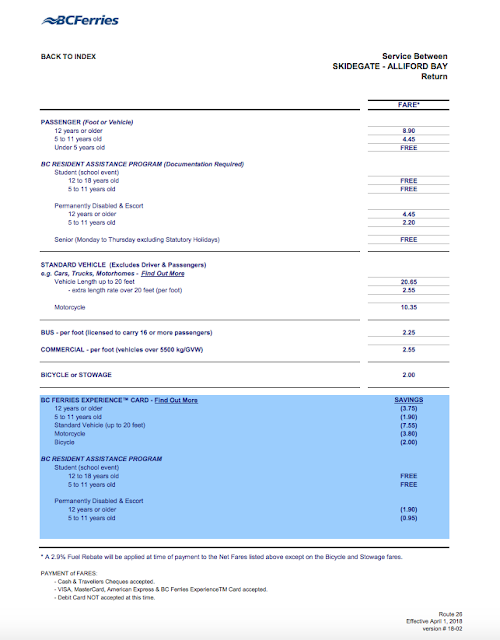 For a look at all Fare schedules across the BC Ferries system see this link.

There were a few other notes announced on Tuesday related to fees for travel aboard BC Ferries they included:

The buy-in level for Experience Cards is reduced by 15 per cent to $95 for vehicle and driver and $55 for passenger fares.

Reservation fees are $10 (down from $15 in 2017) for customers who book seven days in advance on reservable routes; reservations made less than seven days and up to one day prior are at $17; and reservations booked day of travel are $21.

The cost of 10 Assured Loading tickets is held unchanged at $1550.

Details on the fare reductions and other related notes can be explored here.

If you have questions on how the changes affect service on the North Coast you can contact BC Ferries by email at customerservice@bcferries.com

For more notes on marine transportation on the North Coast see our archive page here.

Email ThisBlogThis!Share to TwitterShare to FacebookShare to Pinterest
Labels: BC Ferries rate revisions 2018