Update: In total there were three temblors recorded off the west coast of Haida Gwaii on Saturday, with the final magnitudes ranging from 4.5 to 4.7, the occurred within seconds of each other at 10:58 AM.

A bit of a rumble for Haida Gwaii this morning, with the USGS and Earthquakes Canada making note of  a 4.6 magnitude earthquake just off the west coast of the Islands.

The epicentre for today's seismic event was 142 km South of Masset, 54 km South of Queen Charlotte, it was recorded at just before 11 AM, the depth of the event was listed as 14 kilometres.

Today's temblor was 216.7 kilometres to the Southwest of Prince Rupert. 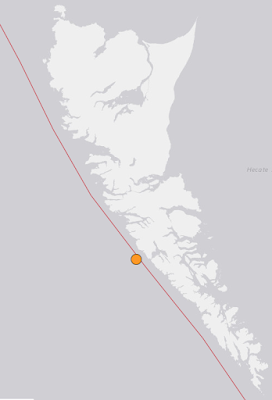 There was a slight difference of opinion earlier between the two agencies as to whether it was a 4.6 or 4.2 magnitude event, with Earthquakes Canada now listing it as a 4.6 event as well. 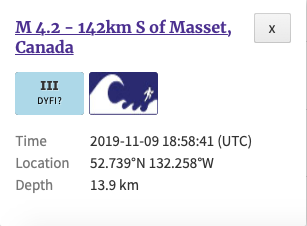 No Tsunami Warning, Advisory or Watch has been generated by this event. 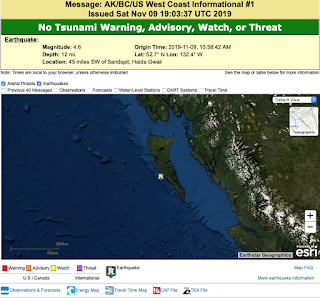 So, far there have been no indications of note from Haida Gwaii as to the morning shimmy.

For more items of note on seismic events around the North Coast see our archive page.
Posted by . at 11:50 AM

Email ThisBlogThis!Share to TwitterShare to FacebookShare to Pinterest
Labels: 4.6 quake off West coast of Haida Gwaii