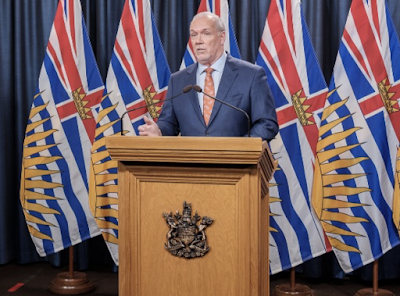 British Columbians will find out this afternoon when the days of a more normal time may be upon us, with Premier John Horgan, Health Minster Adrian Dix, Doctor Bonnie Henry and other government officials set to provide the latest Restart plan for the province.

The 1PM information session will be led by Premier Horgan who offered up a hint as to what's ahead with a short social media blast this morning. 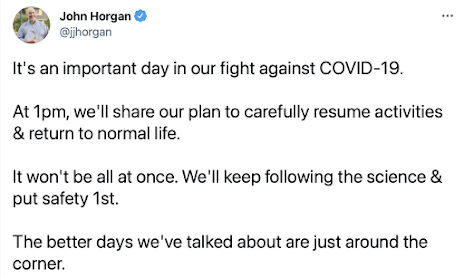 Yesterday, Dr. Henry and the Health Minister released the COVID data update for the Long weekend, which noted of declining case counts in the 300's per day, though with the sombre note of 12 deaths over the 72 hour period.

The information session today comes as some of the 'circuit breakers" put in place in April come to an end, the most significant of them, the travel ban which restricted British Columbians for the most part to their respective health regions in a bid to bring down what had been a rising curve of COVID.

That seems to have been effective if the data from Monday is an indication, though the largest area of concern remains the Fraser Health region which mostly is focus on communities south of the Fraser River, which continue to record the largest volume of COVID cases in the province.

British Columbians will also be watching to see which of the measures put in place over the last few months will be relaxed, among them restrictions on dining and gathering indoors, a topic of note which was addressed by the Prince Rupert Chamber of Commerce last week. 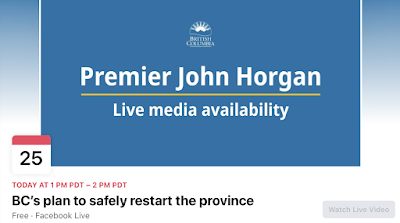 More items of note from the Legislature can be explored through our archive page.