Line painting season returns to the streets of Prince Rupert 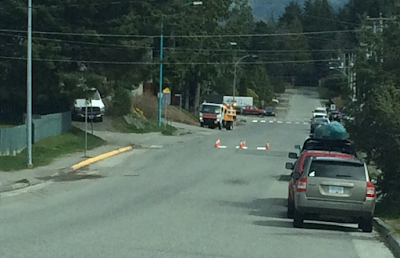 It has been a productive week so far for the crew members from Yellowhead Pavement Marking as they make their way across the city putting down new paint for roadway markings on the city's street network.

Their work began on the west side earlier this week and by today they had crossed over the McBride Street line to begin their assigned tasks from an area from Fifth Avenue West to 11th Avenue West.

Their path blazed by a trail of traffic cones and a number of slalom courses that made for a challenge for commuters at times.

They were working against the clock Friday though, with a nasty weekend stretch of weather on the way. 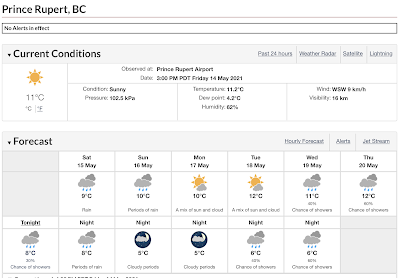 However, if they are still around on Monday, the week to come should be fine for road marking duties.

Their travels arrived just after City Council had made note of the upcoming paving program for Prince Rupert and Mayor Brain had offered up a hint for Councillor Wade Neish that an encore performance may come in the fall for a bit of a refresh of the road markings.

Mr. Niesh and Councillor Barry Cunningham have made the road conditions a frequent talking points at council in recent months, Councillor Niesh seeking a shift in the timeline for road marking, preferring a pre fall rollout of the paint program.

You can review some of the past reviews and commentaries on the city's road infrastructure from our archive page here.