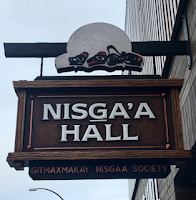 A request for an increase of funding for the local Gitmaxmak'ay Nisga'a Society has apparently been turned down by the Nisga'a Lisims Government, a decision which has sparked some concerns from the local Chairperson Clifford Morgan.

In an update released this week for the local membership, Mr. Morgan outlines how the Final Budget presentation of March did not provide a response to a number of the local society's requests.

With the larger body from the Nass Valley indicating that a status quo budget would be what the Prince Rupert/Port Edward group would have to make use of for the year ahed.

The impact of which the local chair notes will continue to deliver ongoing hardships to Nisga' residents in the urban communities.

For Prince Rupert and Port Edward, among the challenges being faced by the local membership include:

A loss of rental revenue for the Nisga'a Hall which has been subject to the gathering restrictions owing to COVID.

Higher than anticipated expenses for the string of Gitmaxmak'ay Business Operations because of the pandemic.

The latter an area which is also of note for the larger Prince Rupert and Port Edward community considering the growing list of businesses and services that are operated through the Gitmaxmak'ay Nisga'a Society locally.

What is of concern for the Gitmaxmak'ay Nisga'a Society is that the Nisga'a Lisims Government has announced a surplus for their larger budget, while holding the urban communities to their status quo funding.

The local society also outlines a number of areas where they believe that the urban residents are not being provided with proper representation when it comes to key committees or liaison options for Nisga'a governance.

The full address for the local Nisga'a community can be reviewed from the Gitmaxmak'ay Nisga'a Society Facebook page.

Prince Rupert/Port Edward make for one of three Urban Nisga'a districts, with Terrace and Vancouver providing services for Nisga'a members in their communities.

The Gitmaxmak'ay Nisga'a Society concerns could get a review later this month when the NLG Executive host a three day Zoom Session from May 26-28.

More notes of interest on both the Nisga'a Nation and the Gitmaxmak'ay Nisga'a Society work in Prince Rupert and Port Edward can be reviewed from our archive page.