With a signature from the President, the 2021 Alaska cruise season gets ready to cast lines, skipping BC Ports for this year ... 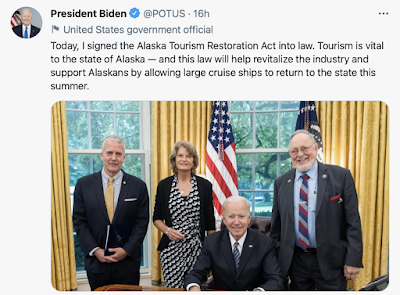 A photo for John Horgan's political scrap book comes from a White House photo op on Monday, with President Joe Biden moving quickly to sign off on a bill from the Alaska delegation that will change the nature of the cruise ship business to the state this year and if the worst fears of those in the BC industry come to pass, for the future as well.

On Monday, the President signed off on the Alaska Tourism Restoration Act, which for the most part is focused on the important Cruise ship industry and its summer long transit to Alaskan ports, with this year one of a journey that will not require any 'technical' stops in British Columbia.

As we outlined last week, the Alaskans were not very happy with the reception that they had received from both Victoria and Ottawa in seeking a work around towards current Canadian restrictions over COVID.

And after a few months of less than attentive action to their concerns, the Alaska delegation crafted its bill, ran it quickly through both the Senate and the House of Representatives, getting it to the Presidents desk by last Friday.

The net result is that ships destined for Alaska will not be required to stop in any Canadian port as has been the case in past years, and with that, the prospect of the temporary becoming the permanent is one which is currently making for much conversation not only at the Legislature, but up an down the BC coast where the cruise industry has put down some roots, including Prince Rupert.

Skeena MLA Ellis Ross, who spoke to the issue last week, was quick to make note of President Biden's quick action on Monday, observing of the impact of the signing and the challenges it may pose for the BC industry's future.

The Skeena MLA is so far the only politician, whether provincial, federal or municipal to actually speak to an issue which could have a long lasting impact on the North Coast cruise industry, which had only started to rebuild its footprint in recent years after a lengthy hiatus from the tourism scene.

And while he's for the most part scoring political points from his commentary, Mr. Ross is probably not too far off on his observation, his thoughts on the issue framed by last weeks very visible anger from the Alaskans directed at mostly the Premier and his cabinet.

The MLA's notes also serve to alert those in the region that have built their businesses with an eye to the cruise industry stops here, that they will have to put some pressure on the provincial and federal government to try to recapture some of the momentum that was last seen two years ago.

For more notes on Tourism in the region see our archive page here.