The latest data on traffic incidents from ICBC shows that for Prince Rupert the greatest danger in your daily transit is found at three intersections in the city's downtown core.

Other troublesome areas of note, intersections at Fifth, Sixth and 11th Avenues on McBride Street, as well as at Second Avenue West and Sixth Street and Five Corners 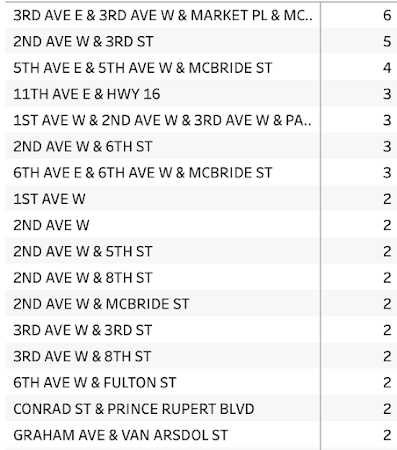 You can explore the interactive data program here to plot the city's trouble spots from east to west.

The intersection at McBride and Second West is one which is on the radar for the ministry of Transportation and Highways, part of a to-do list of projects introduced in the fall of 2018, much of which has been tackled.

Though there has not been much heard in the last year  about what they may have planned for the troublesome intersection. At one point in their review, there was some thought of introducing a traffic circle or roundabout to the location to improve the flow through the downtown core.

More notes on travel along the Highway 16 corridor can be reviewed here.