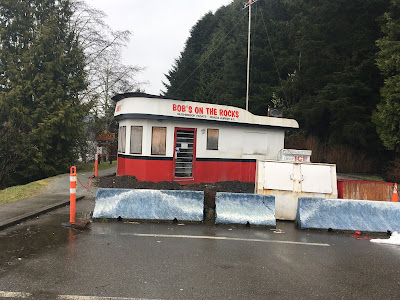 One of Prince Rupert's favourite Take Out spots has shared some news with customers, with Bob's on the Rocks, the Fish and Chips Emporium at Rushbrook Floats putting a pause on their season debut of dishing out Fish and Chips, advising of an Opening Day delay for food service.

The update  shared through a Social Media message today, which noted that the Take Out location's permits have been delayed until a special new exhaust is installed to their Food Truck. The part was required as part of their health permit process.

With the parts still on the way from Ontario, it's not expected that they will be installed and Bob's back in the Food business until June 1st.

The location at Rushbrook will be in operation this weekend however, Open to service for those needing Ice, Fishing licenses, as well as bait and tackle.

The Hours are from 5AM to 8 PM

The Social Media message does however seem to offer up a hint that their leasing situation with the City of Prince Rupert has come to a successful conclusion.

As we noted in March, the popular stop along the Rushbrook Trail was under consideration for a Five Year lease with the city, the most recent public progress on the initiative that of a call for comments or questions from the public by March 26th.

The topic did not come in Regular Business for City Council through their work of the last three months and there was no mention of the leasing opportunity from Council members in their public comment discussion period at the end of each Council session.

The City has not as of yet indicated if the lease discussions have come to an end; or what the final terms may be for the property on the city's east side.

In February it was announced that Bob's on the Rocks was the newest acquisition for the Gitmaxmak'ay Group which now watches over for local business as the Society expands on its business portfolio in Prince Rupert. 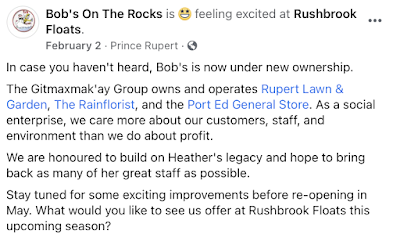 In March, they hosted an online Jobs Fair highlighting a range of employment opportunities with their ventures.

More notes on the city's commercial sector can be explored here.