Premier John Horgan's NDP government was effectively accused of being asleep on the watch as the BC Liberals outlined their concerns over the fate of the BC Cruise Ship industry, that as the US Senate moves forward a bill to allow for transit of Cruise ships from the Lower 48 states to Alaska without need of a stop in a Canadian Port.

The law which has been on the American books for decades requires a technical stop during passage, but with Canadian ports closed to cruise ships for last year and again in 2021, the State of Alaska began to work on the American Senators to lift the requirement in order to salvage their  tourism season.

And while there is obviously not much that the British Columbia government can do about the laws of a foreign nation, the Opposition Liberals made some political hay over the laissez faire approach that the Premier and government ministers took to the discussion in recent weeks.

The Opposition questions of Tuesday calling attention to the potential impact that the American move may have on BC's key Cruise industry ports of Vancouver, Victoria and Prince Rupert.

"The Premier said: "Don't worry." The Minister of Tourism had to be shamed into getting a briefing. And now a bill that threatens our cruise ship sector has been unanimously passed by the United States Senate.  This has forced the Premier to belatedly take the minimum action possible, so he can be seen as doing something. Meanwhile, the threat to Victoria, Vancouver and Prince Rupert is growing, and there's a small chance to stop our ports from being bypassed. Has the Premier asked the federal government to support technical stops in B.C. waters, where anchors are dropped but no passengers disembark?" -- BC Liberal Teresa Wat 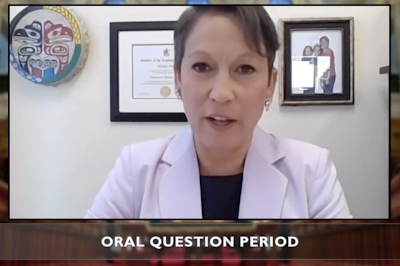 The NDP government's point person on the issue appears to be Melanie Mark, the Minister of Tourism, Arts and Culture for who fielded the questions of Tuesday's discussion.

"This is a bill that has come forward from the Alaskan government. We're actively in discussion with our federal counterpart.

I mean the most important thing I want to emphasize is how valuable the cruise ship industry is to our tourism ecosystem. All hands are on deck. The Minister of Transportation and Infrastructure is working with his colleague in the federal government. I've had active conversations with Minister Joly.

The Premier is meeting with the Alaskan senators in the coming days. And you know that I just want to make it really clear for members at home that the proposed bill is a temporary measure.

And I just have to call out the opposition for trying to drive home this narrative that this is going to be a permanent measure, when it's proposed to be temporary.

The ban will be lifted when the restrictions are lifted from the federal government. The most important thing we need to focus on right now is the vaccination rollout, people being safe. We're going to welcome back tourists right to our ports, because we're a magnet for visitors all across the world."

Liberal Todd Stone sensed some chum in the water on the topic however , noting of the value of the Cruise industry in the province and the need for some support by the Provincial government.

"If the minister truly valued this industry, she and the Premier would have taken action many, many months ago when concerns were first raised.

You know B.C.'s cruise ship sector is responsible for $2.7 billion in economic impact every single year. It accounts for 20,000 jobs.

The cruise ship sector has no confidence in this Premier, in this minister.

And I quote: "The likelihood, the feasibility of this being passed right now in the middle of a global pandemic…is pretty slim."

That was the minister explaining why she wasn't making this a priority months ago.

Now, while the Premier and the minister don't see a threat, the industry does. And there is significant worry that temporary will become permanent.

And I quote: "The severity, if it were to happen, really ratchets up the concern." Those are the words of Ian Robertson of the Greater Victoria Harbour Authority.

And it's no wonder that he's concerned. Cruise ships are responsible for $180 million of economic impact every year right here in Victoria. So can the Premier please tell us today what specific steps he's taken to ensure that B.C.'s cruise ship industry has a future here in our province?

For the most part, Ms. Mark dismissed many of the Liberal concerns, noting how at least two of the provincial ports are destination spots for the industry and will continue to find success once more normal times return.

"Victoria's port, Vancouver's port — we're a magnet for tourists, for international tourists, and our industry is going to continue to thrive.

The official opposition are coming in here, acting as though somehow they have a looking glass into the future, drumming up fear that there's a permanent measure, when the bill is unequivocal: it's a temporary measure.

It will be lifted as soon as the ports are open. We are relentless in our advocacy.

The Premier is meeting with the Alaskan senators. We're in active conversations. The Minister for Transportation and Infrastructure — Friday, Monday, on the phone with transportation.

They are alive to our concerns that we are the west coast. We are the best coast. And we're going to ensure that we have a thriving industry.

But to speak to Ian Robertson, we were on the phone with him yesterday.

He is a valued partner. We respect his leadership. We are listening, and we're acting, and we're going to do that advocacy with the federal government to ensure that we have a thriving cruise ship industry."

The possibility that the temporary removal of the port call requirement may become a permanent feature also made for some of the Liberal narrative during the Question Period session, with MLA Mike de Jong suggesting that the NDP had not been taking the topic seriously.

"Two months ago, when we brought this issue to the minister's attention, she didn't even know about the legislation. She wonders why people don't have confidence in her answers today. It's because, as my colleagues have said, she and the Premier were openly dismissive when the warnings were fired two to 2½ months ago.

A mere "blip," the Premier said. "It hasn't got a chance of passing in the U.S. Congress. It won't ever pass," said the minister just two months ago.

Well, it passed. It passed unanimously. It might not have been unanimous, because there were members in the U.S. Senate who didn't want to stop at making it a temporary measure.

There were members of the U.S. Senate that wanted to make it a permanent repeal of the legislation that helps protect the tourism sector in British Columbia.

And the minister pretends all will be well.

And now, as the bill shifts to the House of Representatives ... she's missing the parts where members of the U.S. Congress are now aggressively advocating to make this a permanent repeal of the legislation.."

Mr. de Jong following up on those comments with a call for the Province of British Columbia to ensure that the need for the technical stops is supported and that protection of the industry in the province is the paramount consideration.

You can review the full back and forth of the Question Period from the Video Archive here, the debate begins at the 10:40 AM period.

The transcript of the Question Period can be reviewed here.

Prince Rupert has been one of the key beneficiaries of the 'technical stops' and other short shore excursion requirement in the past, with some of the larger vessels transiting to and from the Alaska Cruise theatre making a short stop over in the city, sending their large volume of guests off to explore for six to ten hours each visit.

The North Coast last saw a cruise ship in October of 2019, when the Seabourn Sojourn brought the curtain down on that years season with hopes for an even better year ahead.

Those hopes were dashed when the season was cancelled with the arrival of COVID in 2020 and earlier this year the 2021 season was also shut down as the virus continued to make its run around the world.

Alaska has been looking to reopen their industry for the last few months, with many of the communities up and down the panhandle region relying on the revenue generated by the industry.

You can explore more on the Cruise industry from our archive page here.

More notes related to the Legislature can be found here.