The topic of the City's Five Year Financial Plan for 2014 took up almost two hours of the Monday night session and by the time that the discussion had been exhausted, Council found themselves basically back where they started at 7 PM, waiting for more financial information.

The theme of the city's financials began with some participation from the public, with a number of questions regarding the city's revenue stream and costs and the impact that those are having on the residential taxation rates.

As well, items of concern over the cost of the Digby Island Ferry were brought to Council, with former Mayor Don Scott in particular providing some interesting background on the topic of access to the airport and the growing cost to the city of that access. (see here)

As for the Financial Plan itself, the City's Financial Officer Corinne Bomben provided another overview of her financial blue print, but not before first taking issue with a number of points from a recent article in the weekly paper the Northern View.

As part of her review of her report, she highlighted some of the areas where she believed the local paper had not quite delivered correct information to the public on the budget plan.

That would be a theme echoed later in the session by Councillor Cunningham, who referred to the Northern View story as sensationalism.

Beyond the critique of the research skills of the weekly paper, much of the review provided for many of the same points that Council has heard in the last few weeks.  As Ms. Bomben outlined four options for Council to consider, all based on different revenue streams, for the most part based on the Port of Prince Rupert's payments in lieu of taxes.

That is a rate that has yet to be decided as the city and Port continue on with their discussions over that rate for 2014, but clearly much of the City's financial blue print hinges on that final amount.

Towards that final review, Ms. Bomben's four options provided four different scenarios for financial planning for this year, the preference in her accountant's heart appeared to be Option One, which she described as financially prudent. 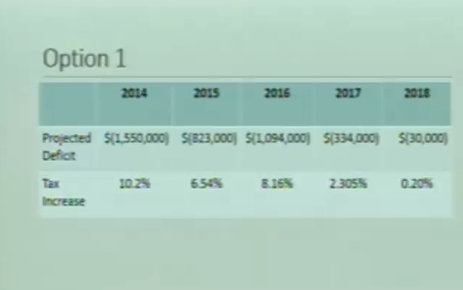 It provides for the most financial security for the city's budget makers, though It provides for a large tax increase over the five years, accounting for anticipated low returns on PILT discussions with the Port and other Civic expenses and financial expectations.

However, with an eye towards the growing unease from the public over the prospect of ever increasing tax rates, her final recommendation to council was to be Option Three.

That would provide for a tax increase of 3 percent, each year over five years. As well as the reduction of two full time equivalent RCMP officers, the city would not require the use of the accumulated surplus to fund the deficit. 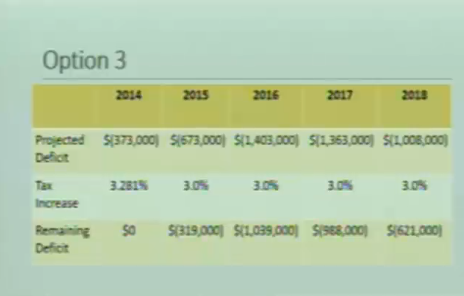 From there the discussion revolved around a number of key issues, most of them raised by Councillor Anna Ashley, who seems to have been busy doing her homework on the topic and who offered up a number of items for consideration, some of which didn't find a particularly warm reception from some of her council partners.

Among her themes, the need to gain a better control of the Airport Ferry situation, with the recommendation of an increase in fares for the transit from Prince Rupert to Digby Island.

Adding in a suggestion that user fees be increased, placing some of the revenue generation requirements on those that use civic services.

She introduced CityWest as another area where the City should become more involved with, seeking a higher dividend for this year and if one cannot be delivered, suggesting that the City conduct a cost analysis on the communication company (see here)

She also recommended that Council consider not taking their annual trip to Ketchikan this year, as a cost cutting measure.

As well, she observed the nature of the PILT discussions and the current unknown of those financial numbers.

Following her talking points, Council members offered up their concerns over some of her suggestions, ranging from fears that the Airport Ferry proposal would drive traffic to the Terrace airport, to the desire to spread the cost of civic services across the board, rather than by user fees.

As the discussion of the budget planning approached the two hour mark, the decision to wait for further information became the theme of the night.

With Council asking staff to seek out a meeting with the Airport Society to discuss the impact of any proposed Ferry rate increases, while they also await further word from CityWest as to the nature of their  dividend return for this year.

Council will then meet in a special session following those meetings to move forward on their Financial plan for this year.

When they do, city residents no doubt hope that more members of Council join in on the discussion.

As mentioned earlier, the majority of Monday's conversation was brought to the Chamber by Councillor Ashley, who clearly has set the bar high for council participation.

The rest of her partners on  Council now need to hit the books if you will and offer some creative solutions to the public, other than just hitting the ATM that appears to be the residential tax payer.

Most importantly, Council should perhaps hold off on any more public sessions on the budget until they have a full understanding of how much money they have and where they are going to get it from.

Or as the Mayor puts it, "it's hard to do projections when theres' s a certain amount of unknowns".

These lengthy council sessions while fascinating in their overview of information, haven't to this point provided a very clear picture of where the City's financial planning is heading.

More importantly it has become quite clear from recent years, that the Budget story in March, doesn't necessarily resemble the final chapter that Council delivers in May.

Locking down such things as the CityWest dividend, the impact of airport ferry rate increases and other associated expenses should be taken care of quickly. So as to show some progress on the theme and to offer up a much more concise review of what the city is dealing with and clearing up some of the many questions that the public no doubt still have.

You can review the entire Financial review from Monday night through the City Council Video Archive.

The public comment from the start of the meeting can be found at the 38 to 59 minute mark and again from the 1 hour 28 minute to 1 hour 53 minute mark.

We have more on City Council discussion points on our Archive page.

Email ThisBlogThis!Share to TwitterShare to FacebookShare to Pinterest
Labels: City to wait on Financial plan until more information received, March 2014