Thanks for the ride Rainmakers, it was a blast! 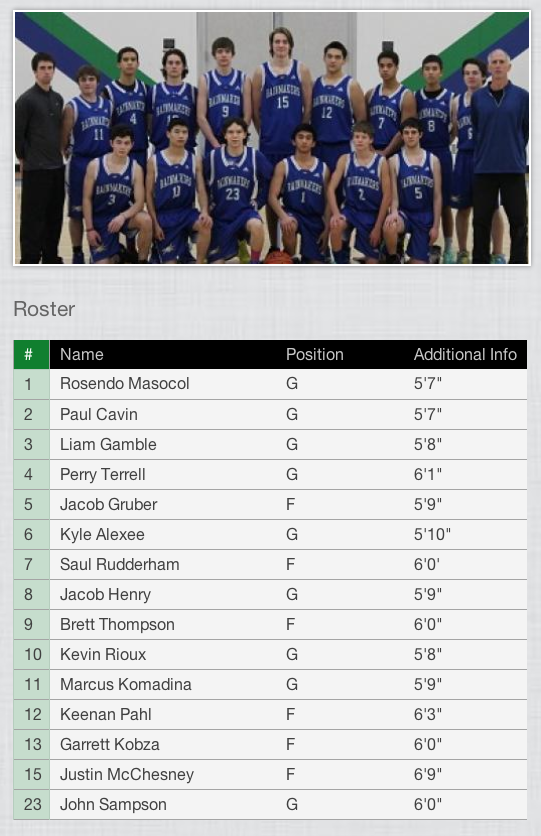 The buzz built through the week, as Rupertites took to their computers, streaming that small square of video form the Langley Events Centre, a beacon of good news that day after day delivered word of a most amazing week of High School basketball.

With that first nail biting finish of the first game, through the climb up their bracket from victories on Thursday and Friday, the Rainmakers became the story of Langley and the talk of the home town.

From grocery stores to coffee shops, the conversations turned to recaps of each day, a shared experience with the champions of the Northwest zone as they took their game to the largest stage that High School Basketball in British Columbia has to offer.

The comparisons to the legendary 64 team that won it all not lost on those old enough to know of it, destiny many suggested was working to hopefully provide a Silver Anniversary like no other.

Alas, all good wishes and dreams don't always come true. The 2014 team falling just one win short of a title,  as a very powerful Saint Thomas More squad took charge in the Championship Final, for this year at least, keeping the provincial banner in the south.

While no doubt a disappointing result for the hard working Rainmaker team, Saturday should not be the final note on a most remarkable year.

A season which began with an exhibition game against the Travelling Harlem Crowns, provided for many thrills for those that wandered into the Charles Hays Gymnasium through the winter months this year.

Highly entertaining matches with local rivals from Terrace, Smithers, Kitimat and Haida Gwaii provided snapshots for Prince Rupert, an indication as to just how far this team might go.

Two trips to Vancouver solidified a reputation for hard work and discipline on the court, something that served them well from November right up until Saturday night.

Credit should be paid to Mel and Ryan Bishop, the two coaches of the Rainmakers who clearly schooled their young team well in solid fundamentals and team work.

From the starting five, to a strong bench squad, this was a Rainmaker team that clearly had pulled together with a destination in mind in November. Taking the Big Show of Langley by storm for four days in March.

They came into the tournament as a bit of a mystery for the Vancouver media, a team that was seeded low, but  arrived with expectations high.

Both the Rainmakers and the Queen Charlotte Saints, who played hard in the AAAA provincials leave the Lower Mainland on Sunday morning, having served notice that a bit more attention should be paid to basketball in the Northwest.

For those that leave the Rainmaker program at the end of this school year, 2014 was a fairly impressive way to put your high school years behind you.  For those that will back at training camp in the fall, the lessons learned in Langley this week will pay huge dividends through the 2015 season.

With an impressive nucleus of young Rainmakers for the year ahead, the season opener for 2015 probably can't come fast enough.

They may not have known it when they left early in the week, but by the time Saturday rolled around the Rainmakers had lots of company on this journey. As the fans back home, spent much of the week on the edge of a seat with every possession and every shot that was made.

Whether they were watching those daily webcasts from work or at home, or were gathered in the bleachers at Charles Hays on Saturday for the giant viewing party, Prince Rupert caught the fever.

Today, here's a collective salute to the Rainmakers of 2014 for a job well done.

Twas quite the ride!

Email ThisBlogThis!Share to TwitterShare to FacebookShare to Pinterest
Labels: Rainmaker wrap up 2014