Season ends for Slubowski and the WMU Broncos 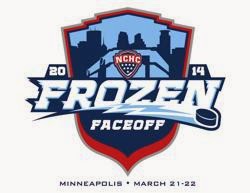 The 2013-14 College hockey season has come to an end for Prince Rupert's Frank Slubowski and his Western Michigan Bronco team mates.

This weekend the Broncos came up short in their quest to advance further in NCAA hockey for this season, with a fourth place finish in the NCHC Championships in Minneapolis.

The Broncos dropped both games of their weekend, a Friday night loss which eliminated them from the championship game and Saturday's bronze medal game, a 5-0 defeat at the hands of North Dakota.

When the Broncos with Frank Slubowski in goal, pushed Denver University to the final whistle before dropping a 4-3 decision, eliminating them from the championship chase in the NCHC.

It was a game that featured a number of momentum shifts, as Slubowski and Denver goaltender Sam Britain settled in for a three period goal tenders duel.

The Broncos, had a number of opportunities to push their way into the finals, but in the end, Denver found the winning range with less than five minutes to go in the third period.

Denver would go on later in the weekend to claim the NCHC championship and a berth in the upcoming NCAA tournament, the seventh year in a row that Denver will appear in the tournament.

Slubowski, who played his minor hockey with the PRMHA, faced 23 shots in the duel, turning aside 19 shots, many of them in the third period as the Broncos frantically tried to pick up the equalizer to take the game to overtime. A quest that they came up just a little short of.

In Saturday's third place game, Slubowski was again in the nets, facing 29 shots during the North Dakota onslaught.

The Broncos goaltender held the back end as best he could, while the Broncos were unsuccessful in their attempts to get back into the game once they had fallen behind.

With the convincing victory by North Dakota, they keep alive their chances of qualifying for an at large spot in the NCAA Tournament.

The 5-0 loss, the last of hockey this year for the Broncos squad, it was not the season wrap that they were looking for and clearly not indicative of the quality of play that the team provided for the majority of their NCHC season.

Scoring summaries for the two games can be found below, as well as recaps of the weekend tournament.

You can review the past year for Frank Slubowski from our archive of Rupertites in sports away from Prince Rupert.
Posted by . at 10:06 AM

Email ThisBlogThis!Share to TwitterShare to FacebookShare to Pinterest
Labels: March 2014, NCAA, Slubowski and the Broncos season comes to an end