Rainmakers move on to Semi-finals, after convincing win over Vernon at Provincials 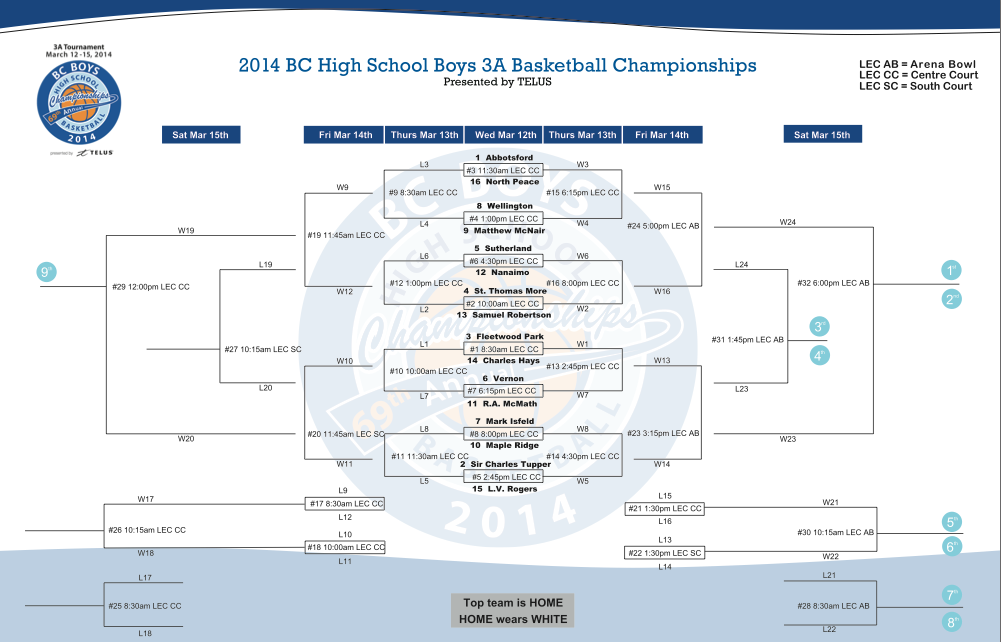 If there is such a thing as a bracket buster in high school basketball, the Charles Hays Rainmakers are making the case for the term to be theirs this year in Langley.

Serving some notice, that after two days of impressive Rainmakers basketball, the Vancouver media might have to save some room for a few stories on the other Northern BC team at Provincials.

Thursday, the Rainmakers continued on with their roll at the AAA tourney, knocking off number six seed Vernon Panthers by a score of 71-51.

Charles Hays jumped out fast in the afternoon match up, rattling off 11 points in the first five minutes of the first quarter, an offensive outburst that seemed to knock the Vernon team on its heels for a bit. The Rainmakers worked the boards hard both offensively and on defence, scoring when on the attack and denying second chances on those occasions that the Panthers closed in close enough to take a shot.

With a good balance of offence and defence, the Rainmakers held a strong 22 to 6 lead after the first ten minutes.

Though, in the overall review of the game, it is the next ten minutes that perhaps provided the Rainmakers with their strongest challenge of the day and how they handled it, tells us a lot about the make up of this years edition of the team.

While the Rainmakers came out strong in the first few minutes, Vernon came on strong midway through the second quarter. Eating away at the Rainmaker lead, as Charles Hays shooters started going cold for stretches, which combined with some untimely turnovers, allowed Vernon some space to start to pick up their offence.

Taking advantage of some defensive lapses, the Panthers closed the gap to nine points at the half. But  the Charles Hays squad never really unravelled, despite the Vernon success in quarter two, the Rainmakers managed to hold off the charge, heading into the locker room leading by a score of 38 to 29.

The break however served to benefit the Charles Hays side, as adjustments were made to problem areas and the Rainmakers came back to the court with a renewed focus on what was needed over the next twenty minutes.

The third quarter resembled more of the Rainmakers earlier play, with some impressive passing and a strong finish around the basket. As in the first, it was the rebounding that seemed to change the flow of the game, the Rainmakers capitalizing in the Vernon end, while shutting down the Panthers in the Charles Hays end, frustratingly taking away the lanes and limiting their opponents to high risk long shots, that more times than not bounced harmlessly off the backboard.

As the third quarter clock worked its way down to zero, the Rainmakers had developed a nice rhythm on the court, slowing the pace down when required a strategy that lifted them to a 52 to 38 lead a three quarter time.

The final ten minutes played out in much the same fashion, strong defensive play, particularly in blocked shots left the Panthers shaking their heads, each minute that ticked off the clock moving the Rainmakers closer and closer to their semi-final berth.

As the Panthers took more chances in the Rainmaker end, the opportunity for a free pass into the Vernon end began to become more frequent, scoring chances that the Rainmakers took full advantage of.

By the midway portion of the final quarter, the outcome didn't seem in doubt. With all that remained for Charles Hays to do was to remain  consistent on defence, cover the boards and stay out of foul trouble as much as possible.

When the final buzzer sounded, the Rainmakers were looking at a 20 point victory, 71 to 51 and the team with some pretty long odds heading into Wednesday, was suddenly becoming the talk of Provincials.

Leading the Rainmakers in scoring Thursday afternoon were, Rosendo Masocol who had a strong game with 15 points as did John Sampson also with 15. Rounding out the top four scorers on the day were Garret Kobza with 14 points and Justin McChesney who had 9 on the scoreboard along with some timely blocks in the defensive zone.

Thursday night they'll review their game plan for their next challenge, taking their game into the Big time atmosphere of the Langley Events Centre Arena and their semi final match up with Mark Isfeld.

Game time is 3:15, when forty minutes of play will tell us all if this remarkable Rainmaker run will continue on into Championship Saturday.


You can follow the progress of the AAA Provincial Tournament from our anchor page, where you can find results, items of interest on the tournament and our link to Streaming Video for Rainmaker games through until Saturday.

For a review of our past Rainmaker items from the path to the Tournament see our Rainmaker Archive page.