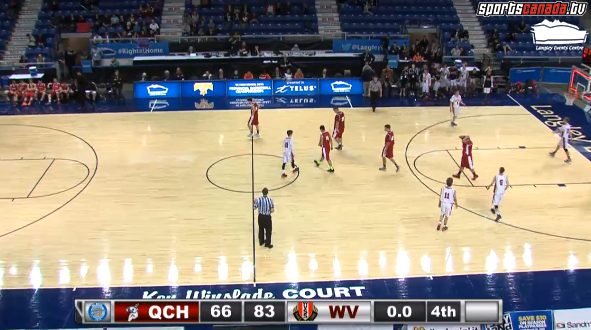 The Queen Charlotte Secondary Saints are learning some valuable lessons at this years grand finale to the basketball season, the main takeaway being that playing from behind offers a mountain that is sometimes a little hard to climb.

The Saints struggled in the first quarter in Day Two at the AAAA Provincials at Langley, a slow start which allowed the West Vancouver Highlander squad to not only put some points up on the board, but grab a fair bit of confidence from the opening tip off.

Though as we've seen in recent games from the Saints, they don't rattle easily and once they found their game about half through the first quarter they began to methodically chip away at the West Van squad, pulling to within nine points by the time the first ten minutes had come to an end.

Some costly turnovers gave West Van some breathing room as they move the lead back to nine before the Saints came back to close the gap to six by half time, heading into the locker room trailing by a score of 39-36

The third quarter would be the Saints best of the game, as Queen Charlotte took charge of the play for extended periods, pulling even by the six minute mark then jumping into the lead as the final minute of the third arrived.  A last second shot by West Van, helped with some momentum for the Highlanders pulling them to within one point of the pace set by the Saints.

The fourth quarter started off with the prospect of perhaps a major upset in the works, the Saints looking to build on their third quarter surge.

However, the West Van squad finally settled down their game. Methodically working their offence into the Saints zone, grabbing a five point lead midway through the final quarter.

As the final five minutes played out, the Saints began to lose some of their gas, pressing at times to try and gain back some of their lost points, turnovers began to take their toll as West Van built up a double digit lead into the final minute of play.

The final score of 83-66 perhaps not indicative of the closeness of play through the middle two quarters, where the Saints were flying at top speed and once again provided a glimpse of what everyone had been talking about as the tournament opened up on Wednesday.

The loss puts the Queen Charlotte squad into Friday looking for their first win of the tournament.

They'll reset their game plan for a match up with Mount Baker at 5 PM in the Langley Events Centre Gymnasium.

You can follow the progress of the AAAA Provincial Tournament from our anchor page, where you can find results, items of interest on the tournament and our link to Streaming Video for Queen Charlotte games for the remainder of the week.

For a review of our past items on the Saints as we tracked their path to the Tournament through our Rainmaker Archive page.
Posted by . at 9:07 PM