The tournament may be behind them, but already the Charles Hays Rainmakers are being hailed as a force to be reckoned with in 2014-15.

After a remarkable run for the Rainmakers, the team served notice that basketball in Northern British Columbia should be ignored at the peril of those southern teams, as highlighted by their success in the one week tournament.

To reinforce the rise of the Rainmaker basketball profile, the last rankings of the Basketball season were released on Wednesday with Charles Hays leaping into the Top Ten for the first time this season, claiming the number nine spot overall. 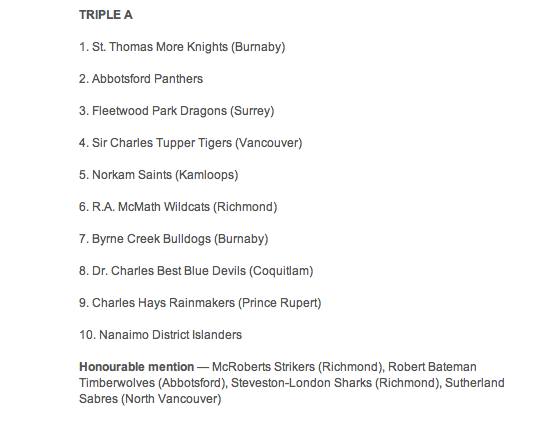 As we outlined through the season, the Rainmakers were bubbling under the radar a number of times this season past, their string of wins over seeded competition in Langley last week finally pushing them over the bar.

As well as the post tournament rankings, the Province also reviewed the Rainmakers journey through the tournament by way of a podcast (listen here) which not only reviewed the success of the team but features profiles of head coach Mel Bishop and Rainmakers forward Justin McChesney. The discussion on the Rainmakers begins at the three minute mark.

The Rainmakers may have arrived in Vancouver under the radar of the big city media, however with their trip to the finals at Provincials, they are clearly no longer a mystery to followers of basketball in the south.

We imagine that the success of this year's Rainmaker's will be blazing the trail for the teams to come and that 2014-15 and beyond may deliver just a bit more attention from the south than in the past.
Posted by . at 8:58 AM