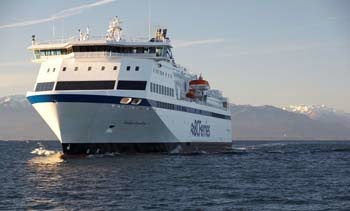 Tuesday found a two pronged approach to the push back against pending ferry cuts in British Columbia, first as a large crowd of protesters gathered on the Legislature lawn calling for the attention of Transportation Minister Todd Stone on the the issue.

Bus loads of demonstrators rally against Ferry Service cuts at B. C. Legislature
BC Ferries cuts, fare hikes anger protestors in Victoria
Protest against BC Ferries takes place in Victoria

Inside the Legislature, the opposition NDP was looking to make their points as well, with some MLA's making use of a report commissioned by the City of Prince Rupert.

As we outlined on the blog back in February, at that time Mayor Mussallem outlined for city council the nature of a report commissioned by the City, designed to examine the impact of cutbacks on not only the North Coast but well into the heart of the Province.

As things turned out, the distribution list for Mayor Jack Mussallem's Ferry Study was apparently wide, as both Opposition Leader Adrian Dix and North Coast MLA Jennifer Rice made use of it on Tuesday.

The opposition leader launched the debate on Tuesday, making mention of his reading material from Prince Rupert and asking Minister Stone about the Government's lack of proper consultation on the impact of the cuts on the communities most affected.

With Prince Rupert's recently released study the centre point of their talking points on the potential impacts on pending Ferry Cuts to the North Coast routes. . . . My question is for the Minister of Transportation. Before announcing its reckless cuts to ferry services, the government failed utterly to look at the economic impact of its decisions. Not one economic impact study was done.

But even if the government didn't bother to do one, the city of Prince Rupert did. They commissioned a report on the economic impact of these decisions on the north. The findings were clear. Liberal ferry cuts will damage the local, coastal and provincial economies. Will the minister please tell us why his government chose to ignore reality and go ahead with cuts without understanding or even looking at their economic impact? ...

Will the minister listen to the mayor and council of Prince Rupert and to the people in ferry-dependent communities, including the people on the lawn of the Legislature, and put these cuts on hold until their full economic impact is understood, at least by him?

The Transportation Minister for the most part advised that he and the government were inclined to stay their course, listing off a number of instances of low ridership and the cost of running ferries for such low payloads.  Insisting that in order to have an affordable and sustainable Ferry System, tough decisions had to be made.

He went on to advise Mr. Dix of his recent meetings with the Mayor and representatives of other coastal communities where very frank discussions were held on the nature of the Government's plans.

Later on in the debate on Ferry Cuts, North Coast MLA Jennifer Rice offered up some questions for the Transportation Minister, highlighting some of the economic impact of the cuts will have on the tourism industry.

Prince Rupert businesses note that B.C. Liberal ferry cuts will undermine the local economy. Pineridge Bed and Breakfast in my constituency says: "We expect an immediate 40 to 60 percent loss of income if these cuts go through." Even businesses outside of the tourism sector are concerned. Like Advantage Print and Design, which says: "Our business has multiple tourism industry partnerships.

If ferry traffic is down, these businesses will suffer, and so, in a trickle-down effect, our business will also suffer." Again, to the minister, why is he trying to shutter the hospitality industry instead of trying to grow it?

The Transportation Minister deflected that particular barb, suggesting that the NDP has no particular solutions if their own in mind to contribute, something he believes British Columbians are waiting for.

He then pivoted on the theme of the economy of the Northwest,  asking Ms. Rice and the NDP as a whole, whether they were prepared to "get on board with LNG", which advised might be pretty good for Prince Rupert and the Northwest.

The full discussion on the proposed Ferry Cuts took up about 20 minutes of the Legislature schedule on Tuesday morning, you can review the full scope of that discussion from the Legislature Draft minutes, the topic starts at the 1035 mark carrying on until 1055.

We have more on items on BC Ferries on our Transportation Archive.

There is also more background on developments at the British Columbia Legislature to be found on our Legislature Archive.
Posted by . at 8:29 AM