While we wait for further word from the City on the Watson Island situation...

It's been four days now since word first broke that the City of Prince Rupert would apparently be heading back to the courts, this time seemingly playing defence we guess, as they prepare to face off against the Watson Island Development Company in a lawsuit over the land deal that seemingly has gone off the rails.

And still after those four days, there has been no word from the City regarding the pending litigation, other than a short statement by the Mayor on Friday to the weekly paper that he doesn't comment  on matters before the court.

No explanation to the residents of Prince Rupert as to why the deal is now apparently off, no word from any of the city's six councillors to let us know if all of them are onboard with the situation and most importantly, no word on what the path ahead may be (other than another need to keep the lawyers on the payroll).

A quick trip back into the time machine takes us to August 2013, when times were clearly happier between the two sides, a time when the City of Prince Rupert wasn't quite so media shy...

On August 29th, 2013, with peace with Sun Wave at hand, the Mayor proclaimed by way of a press release...

"This is excellent news" said Prince Rupert Mayor Jack Mussallem, 'the private sector can now move on with repurposing Watson Island resulting in numerous jobs, while the mill is decommissioned. Congratulations are in order for our new City Manager, Robert Long, who has taken on this complicated file and found a workable solution that is good for Prince Rupert" 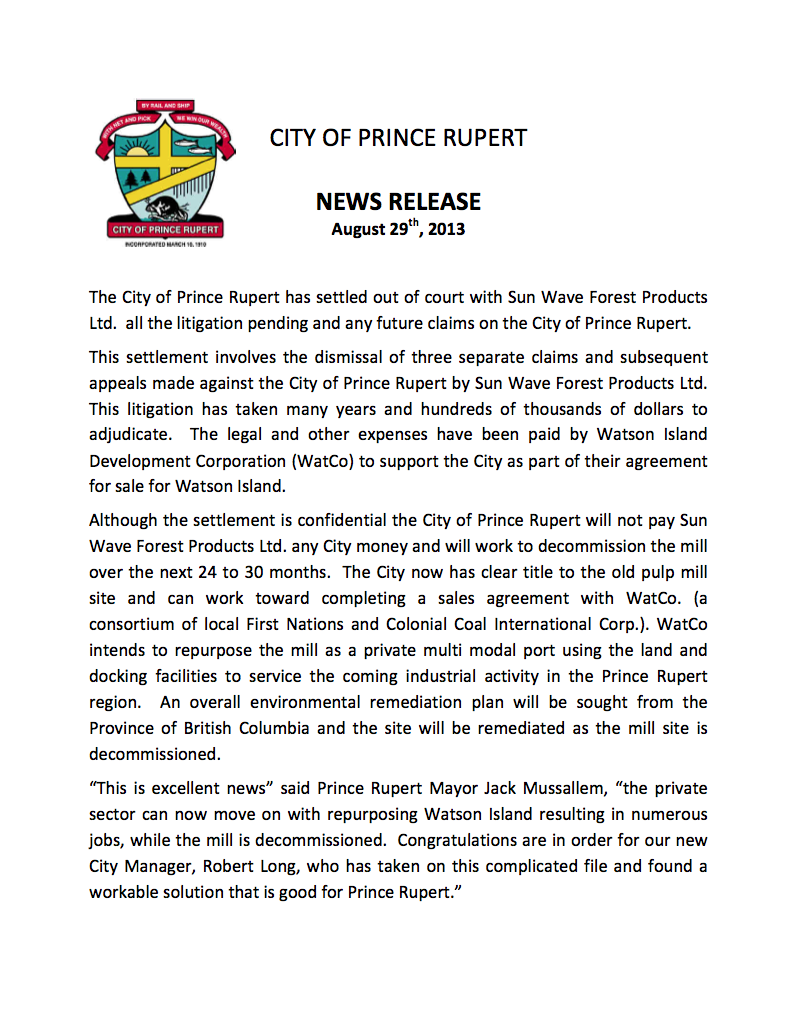 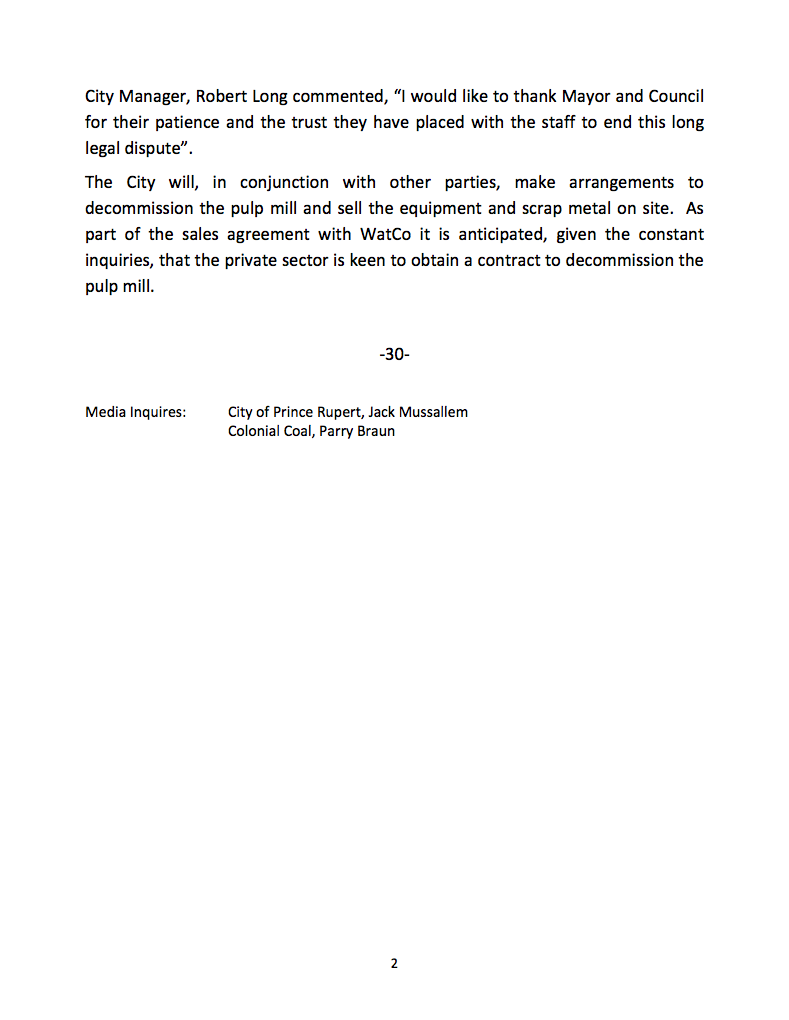 Now, just seven months later it and all those hopeful thoughts appear to have vanished.

The file "complicated" once again to use the Mayor's term of August of 2013 and all of it without word one from the City, as to why we appear to be heading back to a court room to solve a situation that we all thought had been solved.

There is no mention of the Watson Island situation in the Agenda items for Council's Special Session of Council for April 1st, that meeting to be dedicated to a report from Chief Financial Officer regarding Further Budget Options

So, while we wait for some kind of substantial update from the City, or it's Council members, here's something else that might be worth wondering about.

That being the lack of comment so far, from the other two key partners of WatCo and their proposed redevelopment of Watson Island.

Both the Metlakatla First Nation and Lax Kw'alaam First Nation, were major participants at the time of the announcement of the Watson Island proposal.

The review of the unique collaboration of the two First Nations and WatCo, suggesting a new dynamic at work to bring some economic life back to the old pulp mill site.

Their silence so far leaves open for many the question as to what they may think of the latest developments and how it all may affect their plans for the industrial site.

Questions such as whether they are continuing on with their support of WatCo, as these latest developments continue to play out.

Or, if they were caught by surprise, like many residents as to the announcement of last Thursday.

If they have left the WatCo fold, then there may be much more to recent events than we are privy to and their overview of events might be helpful to finding out what's going on.

However, if the two First Nations, like Watco President David Austin, are "extremely disappointed at the sudden change in direction by the City's Mayor and Council", then the possible repercussions for the City of Prince Rupert may go far beyond just the now seemingly troubled sale of the industrial site of Watson Island.

In recent months, City Council has made much mention on the need for more of a working relationship with other communities in the region, seeking to have a more collective approach to some major issues.

One item that the Mayor and City Manager Robert Long have both mentioned frequently in recent months is the wish to have the Airport situation become more of a regional interest.

Looking to share the burden of operations and access to the North coast transportation link with neighbouring communities.

In recent months, the Mayor has also commented that with much industrial development projected for the future, there will be a need for a more regional approach to such things as policing, health, transportation and infrastructure issues.

Then there's that blue print of expansion for Prince Rupert of one year ago, which we imagine is still of interest to all of the city's neighbours, who no doubt keep a wary eye over the proposal.

If the the two First Nations groups involved in WatCo have been caught by surprise as to how this has all developed, it will be worth watching their reaction to the ongoing drama of Watson Island, particularly if it affects their economic plans for their communities.

One imagines, that if the city did not consult with those communities on the fate of the proposed sale, it all may provide the need for some fence mending down the road for the City.

Particularly if the City wishes to see any of their larger regionalization plans to ever see the light of day.

So many questions from Thursdays surprise announcement of the start of legal actions, so few answers provided from anyone involved so far, other than the folks launching the lawsuit.

For a review of the entire Watson Island saga both past and present, we have more available on our Archive page.

Email ThisBlogThis!Share to TwitterShare to FacebookShare to Pinterest
Labels: March 2014, Waiting for information on Watson Island